Shahid Kapoor's brother Ishaan Khatter and late Sridevi-Boney Kapoor's daughter Jahnvi Kapoor have created a storm even before making their official Bollywood debut. The two, who have been paired opposite each other in Shashank Khaitan's Dhadak, share a warm camaraderie off-screen and are often spotted together on public outings.

Ishaan, who has made his debut in Indian cinema with Majid Majidi's Beyond The Clouds, has already won critical acclaim for his performance. But while the film had become a festival circuit favourite a while ago, its official theatrical release is scheduled for Friday.

Among the celebrities who were spotted at the film's special screening last night, Ishaan's Dhadak co-actor Jahnvi was there to support him along with her family. Janhvi's father and producer Boney Kapoor and sister Khushi Kapoor kept her company. 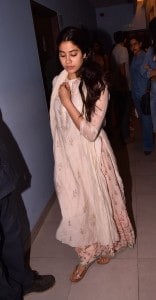 Earlier this year, Ishaan had taken to Instagram to share a photograph of Jahnvi wishing their fans a happy new year. "Catch the magic in 2018," he wrote alongside the photograph.