Bhabiji Ghar Par Hain actress Saumya Tandon who is popular for essaying the role of Anita in the show is blessed with a baby boy on January 14. After much wait, the actress has shared the first pictures of her newborn on Instagram.

'Our bundle of Joy' she captioned the picture with her husband and son. She also took to Twitter to introduce her son to the world and wrote, "Hi there! stepping into your world. “ says he, and he lands into my heart." 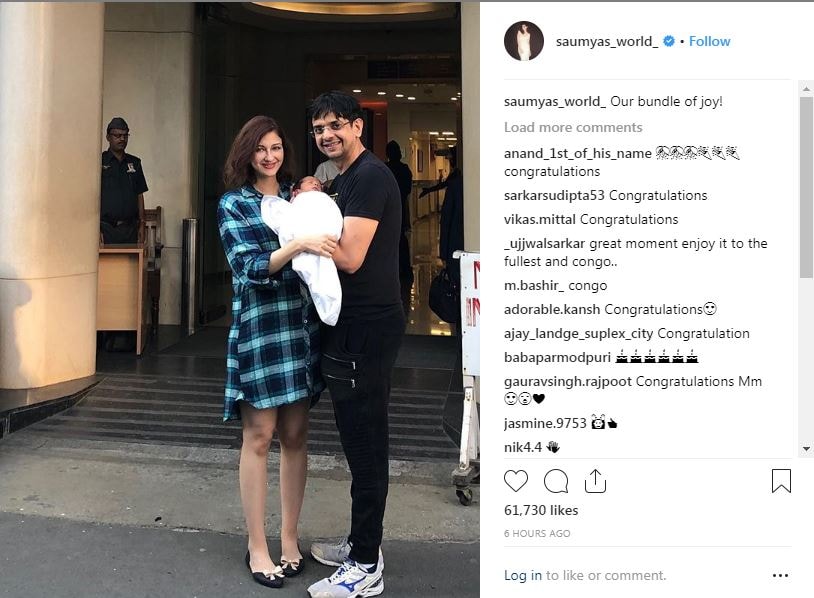 The actress had announced her pregnancy on social media through a series of photos.

Last week before she bid bye to the baby bump, the actress shared a picture of herself and wrote, " Before I say goodbye to my bump. I thought let me get clicked. #newbeginings"

Before I say goodbye to my bump. I thought let me get clicked. #newbeginings . Photographed by @sachin113photographer , thanks for the memories.

Woke up feeling like a magician today, feel like a superhero without a cape most days now, filled with blessing and godliness. Constantly excited by the buzzing in my head and the sudden pump of hormones; this promises to be a fascinating ride. The big news-I'm PREGNANT and trying to soak in every moment of it! Need your best wishes throughout. Thanks @sachin113photographer for capturing my happy moments. You are too sweet. @shraddha.naik thanks for making me always look beautiful and add beauty in my life with ur friendship.

Ever since she broke the news, the actress has been sharing pictures with her baby bump. Not only this, she also shared videos for herself during her yoga sessions.

Yoga for #pregnancyfitness with my guru @shammisyogalaya . All you pregnant ladies Do it only if your doctor allows you and under supervision