Salman Khan is the man of the hour. Co-starring alongside one his most successful associate in the film industry, Katrina Kaif, Salman is back on the auspicious occasion of Eid-ul-Fitr with his latest offering Bharat, a period drama film directed by Ali Abbas Zafar. For Bharat, Salman is collaborating with Atul Agnihotri, who also produced the megastar's hit action film Bodyguard in 2011. So in a way, Bharat is a blend of handpicked, hit ingredients and is anticipated to out do expectations at the box office while delivering wholesome entertainment, coupled with some national values.

Celebrities like Anil Kapoor, Neha Dhupia, Kapil Sharma, Ananya Panday among others have given a thumbs up to the team of Bharat for the compelling treatment of the subject. Most reactions sum up the film in two words-- blockbuster and inspiring. During the grand premiere of 'Bharat,' celebrities like Suniel Shetty, Aayush Sharma, Mouni Roy and many others showed up to support the film and the actors.

Punjabi singer Guru Randhawa has urged fans to go and watch Bharat. In a post shared on social media, Randhawa praised the cast and crew of the Ali Abbas Zafar directorial and wished the entire team of Bharat best of luck and a happy Eid-ul-Fitr. Earlier in the day, Anil Kapoor, Neha Dhupia, Kapil Sharma, Kiku Sharda and others also shared their wishes for team Bharat.

Wishing @BeingSalmanKhan sir, #katrinakaif and team all the best. Go book your tickets for #bharat and enjoy your Eid.
Happy Eid everyone 🙏😊

Actress-dancer Nora Fatehi is playing a role in Bharat. She was also seen dancing alongside Salman Khan in Turpeya. Sharing an adorable moment from the sets of Turpeya, Filmfare shared a BTS video that has Nora dancing to the tunes of her hit dance track Dilbar, besides a cute child. While Nora dons the attire of a bride, the little one is a bundle of joy.

#Throwback: @Norafatehi grooves with a little fan on #Dilbar while shooting for #Bharat. pic.twitter.com/ikxo0a1sZm

Bharat's music album is packed with groovy tracks like Slow Motion and Aithey Aa, and soulful, melodious songs like Chashni. Thanks to music composer-duo Vishal and Shekhar, the film's emotional connect with the audience is elevated to another level. Shekhar Ravjianii posted a clip from a theater where the audience burst into a thunderous applause as Salman enters into the film.

And it erupts!!!!
The explosion of admiration!!!
That’s what you call an entrance #Bharat @BeingSalmanKhan @aliabbaszafar pic.twitter.com/eU6SvtDLVz

Salman Khan’s latest Eid offering is likely to get off to a rapturous start. One got a hint of what was in store as soon as Khan walks into the frame as a grizzly, 70-year-old Bharat. That’s right, he does play a septuagenarian but one with a flamboyance that even a 30-year-old would envy. 'Bharat', starring Salman Khan and Katrina Kaif, falls short of becoming a tour de force, but it could surely turn into a massive crowd-puller. Kapil Sharma shared his best wishes for Sunil Grover and the team of 'Bharat' including Salman Khan, Katrina Kaif and director Ali Abbas Zafar on the day of release.

With Bharat, director Ali Abbas Zafar has expanded his horizons. He has experimented with Salman's look in the film, as the character ages from early 20s to early 70s during the timeline of the film. Katrina's character Kumud Raina also witnesses aging during the course of Bharat. A BTS video shared by Ali takes the viewers into the world of Bharat. Shot on the Mediterranean Sea, this particular clip gives us a glimpse of the kind of hard work that went into making Bharat's story come alive on screen.

With Bharat, director Ali Abbas Zafar has expanded his horizons. He has experimented with Salman's look in the film, as the character ages from early 20s to early 70s during the timeline of the film. Katrina's character Kumud Raina also witnesses aging during the course of Bharat. A BTS video shared by Ali takes the viewers into the world of Bharat. Shot on the Mediterranean Sea, this particular clip gives us a glimpse of the kind of hard work that went into making Bharat's story come alive on screen.

Bharat brings together the hit actor-director pair of Salman Khan and Ali Abbas Zafar for a third time. They have earlier delivered box office successes like Sultan (2016) and Tiger Zinda Hai (2017). While roping Katrina Kaif in Bharat, the duo will aim to recreate the box office magic akin to Tiger Zinda Hai. A user on Twitter mentioned how their latest collaboration Bharat is a hit, courtesy of its emotional storyline.

#AliAbbasZafar thanks for such a beautiful movie. Don't know about its financial success. But it will touch ppl heart...

Actress Neha Dhupia too reacted to Bharat and congratulated the cast on the big day. Taking to Twitter she shared her thoughts on the Salman Khan-Katrina Kaif starrer film and said that Bharat has all the ingredients of a wholesome entertainer. Neha also called Katrina is a "Tsunami of talent and stardom."

Actor Kichcha Sudeepa congratulated the team of Bharat on social media on the day of film release. While reacting to an image shared by Salman Khan on his handle, Sudeepa wished his fans and team Bharat a happy Eid-ul-Fitr and showered love and praise on the actor.

Stand-up comic Kapil Sharma, who has hosted Salman Khan a number of times on his chat show on various networks, wished the team of Bharat on the day of release. He posted a message on social media urging fans to watch the film with their families. He also congratulated actor and fellow comedian Sunil Grover, who was part of the Kapil's numerous shows for years.

Congratulating the team and cast of Bharat, Anil Kapoor urged fans to go and watch the film in cinemas. He took to social media to share love for Salman Khan and the unit of Bharat on the day of release. Anil termed Bharat "A journey worth witnessing."

Giving a screen count of Bharat release, trade analyst Taran Adarsh informed readers that the Salman Khan-Katrina Kaif starrer period drama has opened in 6000 plus screens in India and abroad. In that, 4700 plus screens are in India and the rest 1300 are in places like Middle East nations, Australia, Germany, among others. 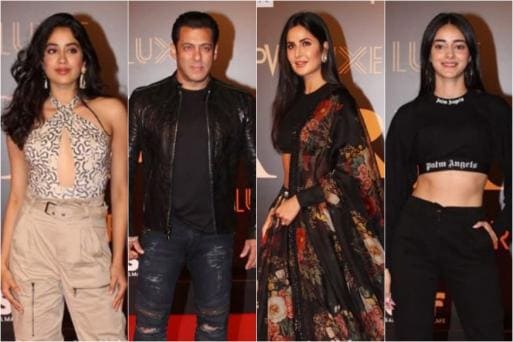 On Tuesday, the makers of Bharat held a grand premiere for the star cast and B-Town in Mumbai. The grand premiere saw a huge attendance from the film fraternity.

Salman Khan fans could not keep it to themselves while the actor danced to the tunes of Slow Motion. Audience in theaters grooved alongside Disha Patani and Salman, while turning the theater into a stadium, infectious with palpable Bharat-mania vibes.

SALMAN KHAN IS THE BIGGEST MEGASTAR OF HISTORY OF INDAN CINEMA
ONLY he Can Change Theatre into STADIUM
Just See the #SlowMotion Atmosphere in Theatre#BharatDay #bharat pic.twitter.com/DVYcUJAaJD

Filmmaker Anand Kumar (Zila Ghaziabad) has heaped praise on Salman Khan and his film Bharat. Anand said that Salman's film release is nothing short of a festival and that there's no star in comparison to him. He also wished Salman a happy Eid-ul-Fitr in his message. Anand is currently working on a biopic of former India football captain Bhaichung Bhutia.

There is no comparison of the euphoria around a @BeingSalmanKhan film release with any other Star in the present era.
This is nothing less than a film festival celebrated on #Eid and #Bharat together celebrate it ! #EidMubark bhai !

Sharing the global frenzy surrounding Salman Khan's Bharat, trade analyst Taran Adarsh wrote that the film is releasing in 70-plus countries overseas. He added that it is the star's biggest release in UAE, the Gulf Cooperation Council (GCC) region and Australia. He further stated that Bharat is also Salman's first ever day and date release in Saudi Arabia, where he enjoys a huge fan following.

#Xclusiv info on #Bharat...
⭐️ Biggest ever release in #UAE - #GCC [121 locations] and #Australia [75+ locations].
⭐️ First Salman Khan film to have day-and-date release in #SaudiArabia.
⭐️ Will release across 70 countries #Overseas [in more than 1300 screens].#BharatThisEid

Salman Khan posted a picture with filmmaker friend Sooraj Barjatya on Twitter, while Salman's brothers, Sohail and Arbaaz, also posed all smiles for the camera.

Early reviews for Salman Khan, Katrina Kaif starrer Bharat have started pouring and social media users have declared the film a blockbuster. Bollywood singer Palak Muchhal also took to Twitter to laud Bharat.  Some fans have even termed it "exceptional." Early reviews for Salman Khan, Katrina Kaif starrer Bharat have started pouring in and fans have declared the film a blockbuster.

Actor Sunil Grover, who will feature as Salman Khan's friend and colleague in Bharat, posted a wish on social media on the occasion of Eid-ul-Fitr.

Eid Mubarak Everyone. May all your prayers be answered. Love and wishes. 🎊

Wishing all the best to team #Bharat

If you don’t get tickets of Bharat, you can always watch #TheTashkentFiles

Book in advance because it’s also running houseful into its 8th week.

Dear Atul...you have been such a fantastic pillar of support for our film.. one of the best producer and production house I have ever worked with 👍👍👍 my prayers will always be with you and Alvira 🤗😘😘 God bless 💖 #BharatThisEid #behindthescenes pic.twitter.com/Aqc2SJtcVj

Rumoured Couple Disha Patani and Tiger Shroff attended the premiere of Bharat on Tuesday. Both the actors looked dapper and stylish as they posed for the cameras. 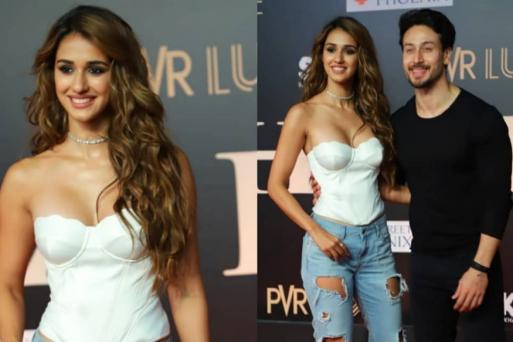 Tiger Shroff and Disha Patani have been linked since 2016, but have never confirmed their romance publicly.

Fan frenzy surrounding Bharat is at its peak. Some people were seen dancing inside the theater while Slow Motion, featuring Salman Khan and Disha Patani, played on screen.

Katrina Kaif wished fans a happy Eid-ul-Fitr by posting a picture on Instagram. 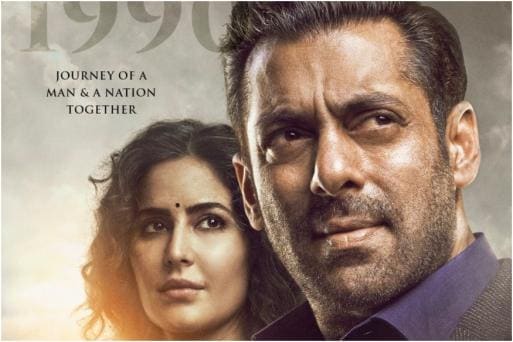 India will play against South Africa in their World Cup campaign opener in Southampton on Wednesday, which also marks the release of Salman Khan's 'Bharat' but experts feel the movie will remain unaffected.

Salman Khan is co-starring alongside Katrina Kaif in Bharat. This is their sixth film together. The Salman-Katrina pair has earlier featured in films like Maine Pyaar Kyun Kiya, Partner, Yuvvraaj, Ek Tha Tiger and Tiger Zinda Hai. This is also the pair’s second film with director Ali Abbas Zafar, who previously helmed the 2017 hit action film Tiger Zinda Hai.

Film trade analyst Sumit Kadel wrote in his tweet that Bharat witnessed a great opening on day one. He further added that the Salman Khan-Katrina Kaif starrer film has recorded a 60-65 percent booking for early morning shows.

#Bharat off to a BUMPER start at the box office across India. Film opened with 60-65% occupancy in early morning shows. Advance booking for today is HUGE, all set for record breaking EID opening.

Bharat is the official adaptation of Korean film Ode to My Father, directed by Yoon Je-kyoon. Film producer Atul Agnihotri admitted in an interview that he viewed Ode to My Father at an international film festival and had since wanted to adapt the film for the Indian audiences.

Salman Khan and Katrina Kaif in a still from the song Aithey Aa from Bharat.


Bharat is the official adaptation of Korean film Ode to My Father, directed by Yoon Je-kyoon. Atul admitted in an interview that he viewed Ode to My Father at an international film festival and had since wanted to adapt it for the Indian audiences. The film will trace Bharat's (Salman Khan) journey from early 20s, when he was young, till early 70s, while he's grown old. In doing that, Bharat will deliver the journey of independent India, through the experiences of a common man.

Bharat features Disha Patani, who is playing the role of a circus performer and artist, and Sunil Grover, who portrays the role of Bharat's friend and colleague. Besides them, the film also has Tabu, Jackie Shroff, Nora Fatehi and Aasif Sheikh in supporting roles, who will partake in the journey of Bharat at different points in the film's timeline.

Read on for live updates about Bharat.