Bigg Boss 11: Divyank Fans Can Relax As Priyank Sharma And Divya Agarwal Have Not Parted Ways

Priyank and Divya, fondly called Divyank, are quite popular on social media and have often been seen expressing love for each other on the platform.

With just two reality shows, Priyank Sharma has built up a huge fan base for himself. The heartthrob, who is currently seen on the latest season of Bigg Boss, came to limelight when he participated on Splitsvilla 10. Interestingly, he also found his lady love, Divya Agarwal, on the popular reality TV show. The two had been spotted together several times post the show. In fact, Divya, in an Instagram live, had also revealed that before entering the Bigg Boss house, Priyank had come to meet her and left half his luggage at her place in Navi Mumbai.

However, if a report in Tellychakkar.com is anything to go by, the two have apparently parted ways.

“Divya had strong feelings for Priyank but now they have broken up! They were never really into a strong relationship. It was always dicey. Divya did have feelings for him but Priyank never really showed much interest. Vikas Gupta’s news was indeed a huge blow to her. She got a reality check,” a source was quoted as saying by Tellychakkar.com.

Soon after the reports resurfaced on the internet, Divya took to her Instagram to clarify that “there’s nothing wrong between me and Priyank and we are happy together.”
Take a look: 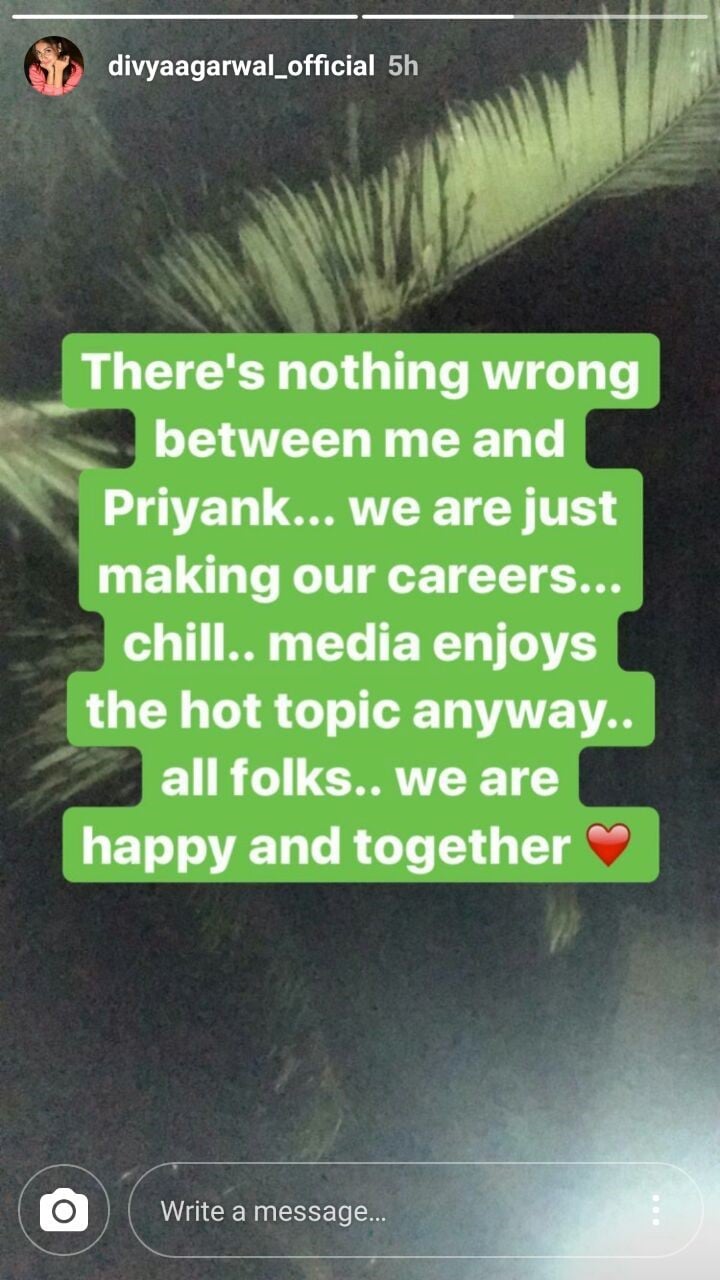 Priyank and Divya, fondly called Divyank, are quite popular on social media and have often been seen expressing love for each other on the platform.

You aren't a star for me.. you're the stupid person that always forgets my favourite song... you aren't the most handsome man on this planet.. you're the cutest little thing that sleeps with an open mouth.. I don't see your body as the hottest and best, i see it as my comfort Home and that's where I want to be always.. you might the PRIYANK SHARMA for the rest of the world but for me you're my kiki ❤️️ who steals my food ... all the best for the ultimate show bb11.. I'm so proud of you ❤️️ #alwayswithyou #loveyou #cookiekiki #bb11 #splitsvilla10 #myrockstar

Can't get over this date! @priyanksharmaaa #cookiekiki Ps- when bestie sends u this picture... it's weird that she is our fan she loves #divyank @a_tendulkar06 ❤️️