Of late, there have been multiple reports claiming that Sushmita Sen's brother and actor Rajeev Sen will be a part of Bigg Boss 14.

Of late, there have been multiple reports claiming that actor and Sushmita Sen's brother Rajeev Sen will be a part of Bigg Boss 14. It was reported that he will join Salman Khan's reality show as a celebrity contestant. However, Sen has quashed all such reports and took to his Instagram stories to put the rumours to rest for once and all. He wrote, "Not in Bigg Boss 14 Loud & Clear Shukriya.” 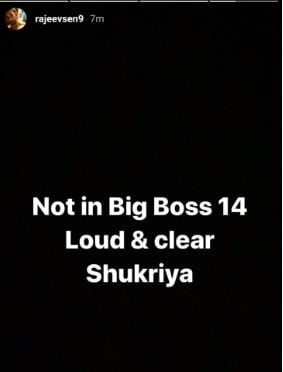 Another star to have openly denied participating in the show is Shekhar Suman’s son Adhyayan. After acting in a few films like Raaz 3 and being in news for his relationship with Kangana Ranaut, Adhyayan is quite active on social media these days. Taking to Twitter, he quashed all the reports.

“False news of me being a part of Bigg Boss! Thanks but no thanks! Disrespectful to say the least! #BigBoss @ColorsTV please clarify this! Regards (sic),” he mentioned in a tweet.

False news of me being a part of big boss ! Thanks but no thanks ! Disrespectful to say the least ! #BigBoss @ColorsTV please clarify this! Regards

While there has been no confirmed news about the next season and the participants, several reports have been doing rounds on social media with an expected list of participants.

Reportedly, the Salman Khan-hosted show is already on board and the shooting will start in two months. As per reports, actors including Nia Sharma and Vivian Dsena have been approached to be the part of the upcoming season.

If multiple reports were to be believed Bigg Boss 14 was supposed to be announced in June, but the coronavirus outbreak delayed the grand launch of the popular reality show indefinitely.

As for its first promo featuring host Salman Khan, it is reported that the actor might shoot the BB14 announcement from his Panvel farmhouse.

Notably, Sidharth Shukla was the winner of the last season. While Asim Riaz ended up as the first runner-up.
Tags: