Bigg Boss 16 LIVE Updates: MeToo accused Sajid Khan’s entry as one of the contestants on the latest season of Salman Khan-hosted Bigg Boss has prompted a backlash on social media. The premiere episode of Bigg Boss 16 aired on Colors on Saturday amid much anticipation. Nimrit Kaur Ahluwalia became the first contestant to enter the house. However, it was Sajid’s appearance on the show that took the internet by Read More

That’s all from the grand premiere of Bigg Boss Season 16! In the next episode, Bigg Boss will give a task to all the contestants.

Sajid Khan reveals that his sister and filmmaker-choreographer, Farah Khan, has asked him to be himself on the show. Salman Khan says that there is a high possibility that Farah, who is a huge Bigg Boss fan, might appear on the show as a guest. Sajid says that he hopes Farah doesn’t visit the show.

Netizens have expressed major displeasure over MeToo accused Sajid Khan’s entry in Bigg Boss 16. One user wrote, “Seriously? I thought that was a joke! Sajid Khan? Despite all the allegations and his infamous controversies, the guy has the audacity to come to a reality show to white wash everything?” Another one tweeted, “It is just horrible to see sexual assaulter and #Metoo convict Sajid Khan is given stage on a popular show in Indian television.”

Seriously? I thot that was a joke! Sajid Khan? Despite all the allegations & his infamous controversies, the guy has the audacity to come to a reality show to white wash everything?

Bravo. Nothing more to say.This season is already a hit in terms of being viral. #BB16

Shehnaaz Gill, in a video message, shows her support to Sajid Khan. Shehnaaz says that she is rooting for Sajid and wants to see him entertain the audience. She asks him not to fight inside the house.

Sajid Khan makes a comeback four years after multiple women accused him of sexual misconduct during MeToo movement. Sajid says he decided to do the show after he was approached by Bigg Boss makers. “I was sitting idle and had no work for four years. I think success destroyed me. I became too arrogant,” Sajid told Salman Khan on stage. As Archana Gautam’s luggage doesn’t arrive in time, she creates a ruckus inside the house. She even yells at her fellow contestants.

Sreejita De and Tina Datta claim that they have been friends for over 10 years now. However, as soon as they enter the house, Salman plays a video in which Sreejita is heard saying that she is not friends with Tina and she is “extremely dominating”.

TV actress Sreejita De has joined Salman Khan and Tina Datta on stage. Sreejita and Tina have worked together on the popular daily soap Uttaran.

Tina Datta is the next contestant of Bigg Boss 16. Tina says that she is open to finding love inside Bigg Boss house. She even asks Salman to send a nice man inside the house.

Archana Gautam gets into a heated argument with Nimrit Kaur Ahluwalia as the latter says that she plans to change her bed. “Tum log pagal ho kya?” Archana yells at her fellow contestants.

Bigg Boss 16 live updates: Manya Singh in tears as she shares her struggles

Manya Singh, who was born in the small village of Kushinagar in Uttar Pradesh, is the next contestant of Bigg Boss 16. Manya finished second in the Femina Miss India 2020 competition. While interacting with Salman Khan, Manya got teary-eyed as she recounted her struggles. Manya’s father is an auto rickshaw driver in Mumbai. Manya revealed that it took her almost two years to get an ad commercial after participating in Femina Miss India 2020. Sumbul Touqeer Khan gives a tight hug to her father as she gets emotional on the Bigg Boss 16 stage. Sumbul Touqeer Khan sets the stage on fire with her crackling dance performance. The actress is the youngest contestant this season. She also imitates Salman as the Weekend Ka Vaar host, leaving the Bollywood star in splits. 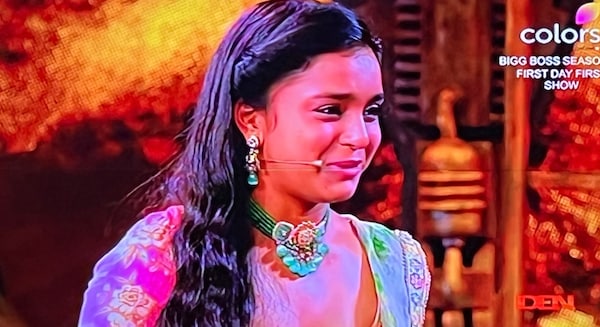 Salman Khan welcomes actress Soundarya Sharma on stage. Soundarya, also a dentist, made her acting debut with a lead role in film Ranchi Diaries which was produced by Anupam Kher. 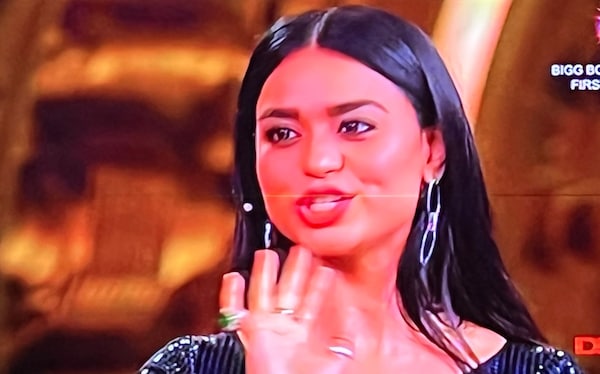 Bigg Boss offers to make Nimrit Kaur Ahluwalia the captain of the house if she allots new contestants (who will enter after her) a bed and make them do a task in the house.

A new promo of Bigg Boss 16 confirms filmmaker Sajid Khan’s entry in Bigg Boss 16 house. Sajid’s entry is likely to create a stir online as the filmmaker was accused of sexual misconduct by multiple women during the MeToo movement.

Bigg Boss 16 live updates: Shalin Bhanot is the next contestant

Shalin Bhanot is the next contestant of Bigg Boss 16. The actor, who was previously married to former Bigg Boss contestant Dalljiet Kaur, says that people have a misconception about him that he is a bad guy ever since he played the role of a villain in his last show.

Nimrit Kaur Ahluwalia becomes the first contestant to go inside the confession room. However, the actress gets an earful from Bigg Boss for not performing her secret task well.

Unlike every season, the house of Bigg Boss 16 has four distinct bedrooms. The four bedrooms designed by Omung Kumar B and Vanita Omung Kumar are called the ‘Fire Room,’ ‘Black And White Room,’ ‘Cards Room,’ and ‘Vintage Room.’ Since the theme of the show is ‘circus’ this year, host Salman Khan will be the ‘ringmaster’ of the house.

Meanwhile, at the press meet which was held in Mumbai earlier this week, Salman Khan introduced Abdu Rozik as the first confirmed contestant of Bigg Boss 16. The actor also addressed the rumours of his salary for the new season. It was long reported that Salman was charging a bomb for the 16th season. The Bigg Boss 16 host poked fun at the rumours by bringing up the “reports” that claimed a Rs 1000 crore price tag and said, “I was going to return the money I didn’t get only.”

This year, Bigg Boss 16 promises to be different than the previous ones. Salman hinted that ‘Bigg Boss’ would be participating in the show himself while Salman would host the ‘Weekend Ka Vaar’ on Friday and Saturday, as against to norm of Saturday and Sunday.