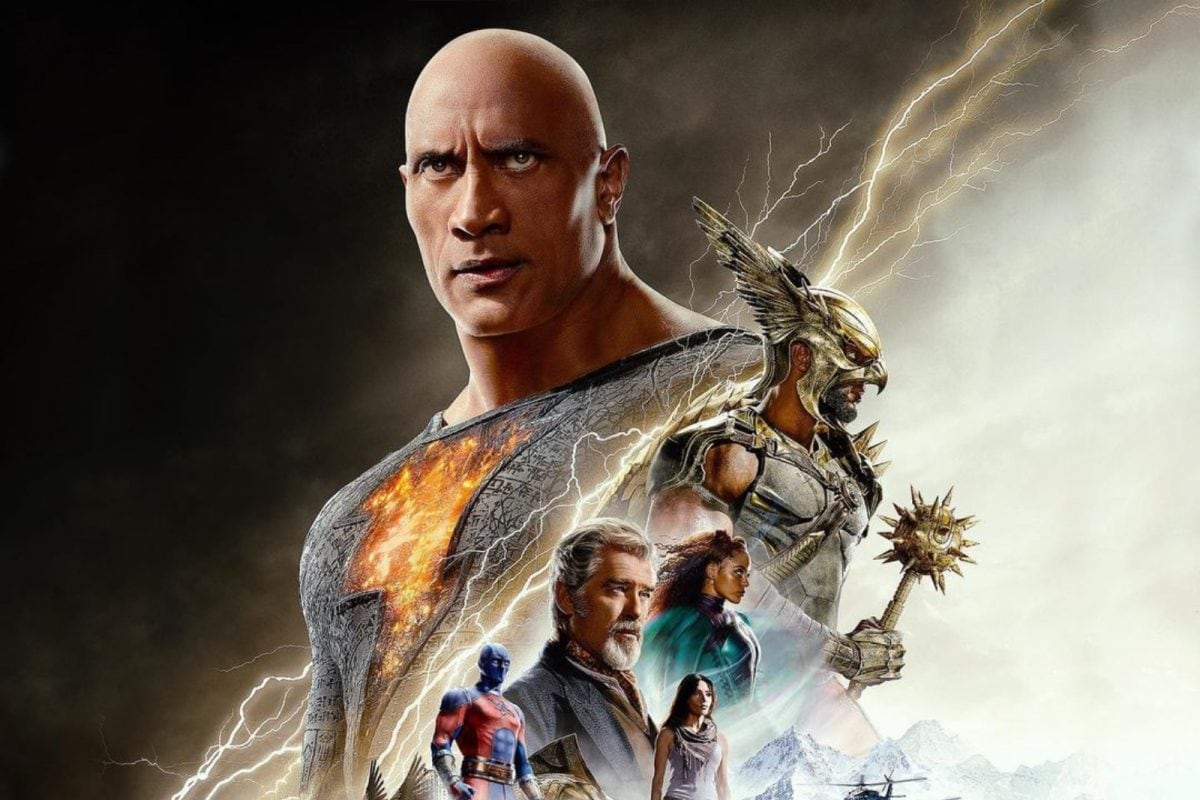 Black Adam movie review: Dwanye 'The Rock' Johnson shines as the anti-hero Black Adam in the DCEU film. But a little more work on the execution as needed.

Black Adam Review: There comes a point in the second half of the movie where Aldis Hodge’s Hawkman and Pierce Brosnan’s Dr. Fate are fighting over who should battle Marwan Kenzari’s Ishmael Gregor aka Sabbac. While the scene is meant to be a tad bit emotional, I couldn’t help but think, “Oh here we go again, yet another fight scene." Don’t get me wrong, Black Adam is a treat to the eyes when it comes to action sequences. But the paper soap-thin pages of the script fail to foam up enough to deliver a complete entertainer.

Starring Dwayne Johnson in the lead, Black Adam introduces a new superhuman or rather God in the DC Extended Universe — Teth-Adam. The metahuman is born in the Middle Eastern land of Kahndaq and rises from the dead 5000 years after his clash with Anh-Kot (the ruler at the time) only to see that the upgraded city waits to be liberated from the neocolonial corporate-military complexities controlling it. His rise rocks those controlling Kahndaq. Not only do they know that the electro-crown can now be accessed but there is also a superhuman protecting it.

However, given that he has risen after several centuries, there are obviously several upgrades that he is yet to wrap his head around. This is where Adrianna Tomaz (Sarah Shahi), a resident professor and freedom fighter, along with her son Amon Tomaz (Bodhi Sabongui) come in. They not only help him protect the powerful crown but also help him catch up with the changing world, encourage him to look beyond his self-proclaimed anti-hero image and even help him come up with a catchphrase for when he beats up the bad guys.

While Black Adam is still trying to figure out the new present, he has to face the Justice Society of America (JSA), comprising Carter Hall/Hawkman (Aldis Hodge), Kent Nelson/Doctor Fate (Pierce Brosnan), Albert “Al" Rothstein/Atom Smasher (Noah Centineo), and Maxine Hunkel/Cyclone (Quintessa Swindell). They land in Kahndaq with the mission to capture Black Adam and restore peace in Kahndaq. However, after a couple of fights, they side with Black Adam in his and the Kahndaq citizens’ fight again the corporate-military setup. Does that anti-hero emerge as the hero that DCEU truly requires at this point? I’ll leave it to you to watch and find out.

However, I will tell you that Black Adam is the most cliched superhero movie that Hollywood has been making over the years. The formula remains the same while the visuals seem to win you comfortably. However, the biggest issue with Black Adam is the lack of depth. In an attempt to pack in several subplots and characters within two hours, the film doesn’t allow you to connect with the events or characters, making the narration more mechanical than emotional.

Every 20-odd minutes, the film adds a heavy dose of new information but fails to give you the backstory or a proper introduction. For example, the JSA is introduced even before even allowing Black Adam to settle into his suit. There is no origin story, the motive behind their formation, or the capabilities that make them a god/superhuman chaser provided. The movie leaves it to you to do your research before or after watching the film instead of helping non-comic book readers interested in DCEU to fully understand their connection to the universe.

Another issue of the film is the unstable flow of events. Juggling between his past and present, Black Adam is confused about what to focus on: the superhuman’s origin story or the present-day scenario. The shifting gears between past and present go on until the climax scene begins. This leads to a lot of threads hanging that the viewers are expected to tie.

Nevertheless, the film has its share of positives too. One of the biggest things that worked in Black Adam’s favour is Dwayne ‘The Rock’ Johnson. The actor looks like a superhero right out of a well-kept figurine collectibles box. His bulked-up body fits perfectly with the tone of Black Adam in the comics and his deadpan expressions, even during a comedy scene, work well for the movie. Although the role doesn’t allow him to show off his iconic smoulder as much as he would usually do in his other movies, Dwayne has stepped out of his comfort zone and taken a well-deserved seat on the throne.

Aldis Hodge supports him well in all the scenes they share. It is a treat to watch them clash on the big screen. As always, Pierce Brosnan leaves you smitten with his charming and charismatic aura. Noah Centineo and Quintessa Swindell appeared to be extended cameo roles rather than supporting roles. A little more writing in their characters would have helped them stand on par with their fellow on-screen JSA members.

Black Adam is yet another film this year that has not done well on the dialogue front. Much like Brahmastra, Black Adam also has some weak dialogues, weighing down some strong scenes. But kudos to Lawrence Sher and the VFX team. They not only portray Black Adam as a worthy opponent for DC superheroes such as Batman, Aquaman, and Superman, but they also build a beautifully ruined world around the flawed god that makes it difficult to take your eyes off the screen. Also, a special mention to musician Lorne Balfe, who has supported these visually rich scenes with an impressive score.

Bottom line: Despite its flaws, Black Adam makes for a good one-time watch. The film adds colour to the otherwise dark DCEU, steering the universe towards a more Marvel Cinematic Universe way. The film ends on a high note with its post-credit scene which somewhat makes up for its rushed approach to telling the tale.