American pop-star Britney Spears will soon tie the knot with her longtime boyfriend Sam Asghari. The couple got engaged in September last year. The hint about the wedding was dropped by Sam in one of his Instagram Stories. “Our lives have been a real-life fairytale. Happy Mother’s Day to you my soon-to-be queen,” he wrote Sam while sharing a photo with his ladylove.

In the pic, Sam indicated that he and Britney are likely to get hitched soon and wrote that their “big day has been set”. He remained tight-lipped about the wedding details and wrote that “nobody will know until the day after.” 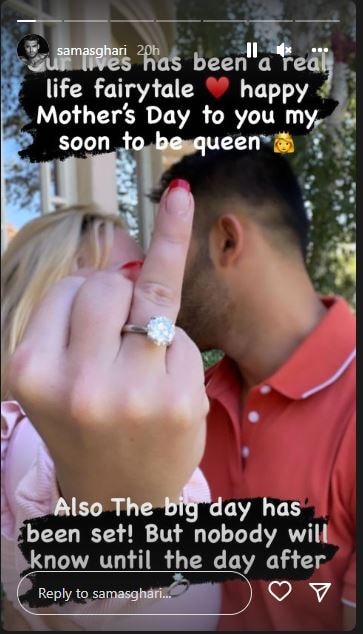 Britney Spears, who is pregnant, had referred to Sam as her husband in one of her Instagram posts. Sam too had referred to Britney as “my wife” on social media. This triggered speculations among fans that they are already married.

However, now Sam has made it clear that the couple is yet to tie the knot.

Britney, meanwhile, seems to have started preparing for her big day as she too dropped similar hints in an Instagram post. Sharing a picture of a cat on her wedding veil, Britney wrote “Introducing Wendy. And yes, this is the veil to my wedding dress.”

The 28-year-old Iranian model and Britney Spears are expecting their first child together. The pop singer had announced her pregnancy in April this year. Then too, Britney had suggested that she has been married to Sam by referring to him as “my husband.”

This was five months after a Los Angeles judge ended Britney’s controversial conservatorship which gave her father control of many aspects of her life. The guardianship was set up by her father back in 2008 after the singer experienced a mental health crisis. Soon after the conservatorship ended, Britney had announced her engagement with Sam whom she has been dating since 2016.