Dressed in a navy blue pullover and pair of beige pants, V was spotted taking pictures of flowers with his smartphone in one of the photos shared on Instagram Story.

Member of South Korean boy band BTS, V aka Kim Taehyung shared pictures from his walk outdoors on Monday. The 26-year-old shared pictures of wildflowers in the Korean countryside. Dressed in a navy blue pullover and pair of beige pants, the South Korean singer was spotted taking pictures of flowers with his smartphone in one of the photos shared on Instagram Story.

In another picture, Taehyung was seen adorning the yellow wildflower behind his ear. The singer certainly enjoys spending time outdoors amidst wildflowers. 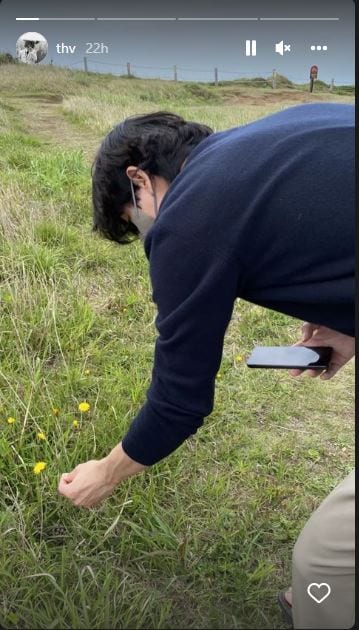 In his latest Instagram post as well, the singer shared a black and white portrait of flowers.

Besides offering his fans a glimpse of his evening stroll, Taehyung also shared a song recommendation. The artist shared the title of the song by Kang Huh Dalrim, (Hug Me Please) on Instagram Story later on Monday. V along with his fellow BTS members: RM, Suga, Jin, Jimin, Jungkook, and J-Hope will soon be releasing their new album. The album titled Proof will be released next month. BIGHIT has been sharing the tracklist of the much-awaited album and fans are equally inquisitive. Last week, BIGHIT released the tracklist for CD 1 of their upcoming anthology album Proof which will feature three all-new tracks alongside many of the group’s past hits. In addition to 17 of BTS’s past title tracks like Born Singer, an adapted version of J.Cole’s Born Sinner that the group first released in 2013 is also there. The album’s lead single Yet to Come (Most beautiful moment of life). The tracks have been produced by Pdogg.

Fans have been sharing their interpretations of the tracklist and their expectations from the upcoming album. This year, the band will also be marking their ninth anniversary since their debut in 2013.