Ranveer Singh was spotted at the Mumbai airport on Thursday night, as he jetted off to Cannes to meet his wife Deepika Padukone.

Ranveer Singh was spotted leaving Mumbai Airport for Cannes on Thursday night. This year’s Cannes Film Festival jury member Deepika Padukone, the actor is expected to support his wife on the French Riviera. The actor shared some shots taken by the paparazzi on his Instagram Story. The 36-year-old artist was spotted in a white sweatshirt and brown velvet pants at the airport. Ranveer accessorised his look with some high-street fashion gear, which comprises a golden yellow Gucci x Adidas bucket hat and a red duffle bag. The Simmba actor wore a pair of sunglasses to complete his airport look. 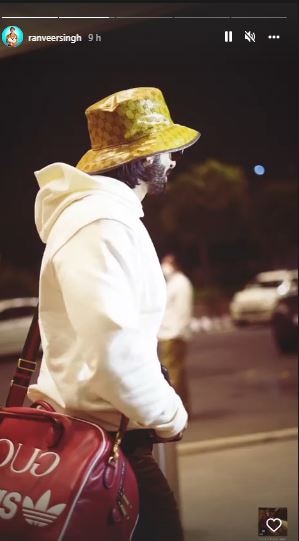 Ranveer is in Cannes to cheer for his wife, who has given us some incredible red carpet moments from the 75th film festival. From donning a Sabyasachi black and gold saree to an all-black power suit, Deepika has been leaving us impressed with her fashion choices.

Deepika shared her Cannes red carpet look on Friday via Instagram. The 36-year-old actress and producer wore a red Louis Vuitton gown that featured a plunging neckline. The Gehraiyaan star completed her look with a statement diamond necklace from Cartier. Posing against the stunning blue ocean in the background, Deepika radiated her elegant style.

Confirming that is going to head to France to meet his hot wife, Ranveer Singh dropped a cute comment on the actress’ Insta post. He wrote,”❤️ killing me.” He didn’t stop with only one comment. He added another one writing, “Ok ! That’s it! I’m taking a flight ✈️.”

We can expect some iconic fashion moments from Ranveer as well, given his penchant for bold and vibrant sartorial choices. In his recent Instagram post, Ranveer flaunted his love for bright colours. The actor was dressed in a co-ord set of a loose shirt and a pair of pants that featured ice-cream cone prints. The print also included vertical stripes in light pink and light blue shades.

Ranveer will next be seen in Rohit Shetty’s action-comedy Cirkus.