In Hindi cinema, the biggest family that has had a lasting legacy is The Kapoors, with five generations of filmmakers, stage and screen actors.

Starting with Bollywood’s first family, the Kapoors, we look at one film clan each day that has been part of Indian cinema for generations.

Indian cinema, across industries, languages and communities, has had several families contribute to its progress over the years. In Hindi cinema, the biggest family that has had a lasting legacy is The Kapoors, with five generations of filmmakers, stage and screen actors. They span almost eighty years of filmmaking in India, from the twenties to the present. They are also linked to other major film families. Surinder Kapoor, Bollywood producer and father of actors and producers Anil, Boney and Sanjay Kapoor, was a cousin of Prithviraj Kapoor. Kareena Kapoor’s marriage to Saif Ali Khan has related them to the Pataudis, while Raj Kapoor’s daughter, the late Ritu Nanda, was Shweta Bachchan’s mother-in-law.

Here’s a look at the family tree of the Kapoor’s 5 generations of direct descendants over 93 years in film industry, with Prithviraj Kapoor as the patriarch. His brother Trilok Kapoor was also an actor. 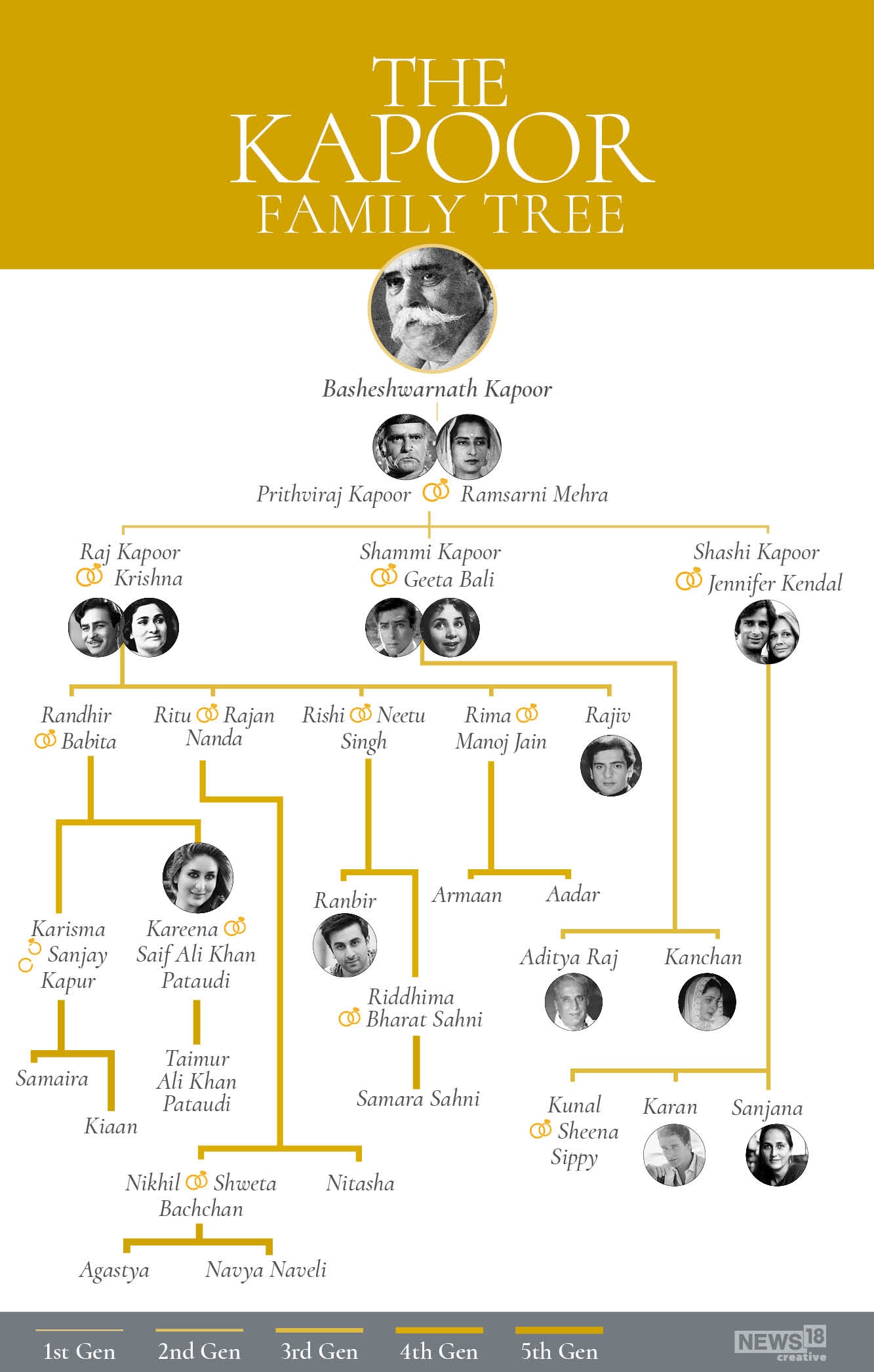 1st generation:
Prithviraj Kapoor’s father Basheshwarnath Kapoor debuted as an actor in 1951 film Awaara, which was produced, directed and actded in lead role by his grandson Raj Kapoor, making him the earliest linear generation of Kapoor family tree to ever act in the films.

2nd generation:
Prithviraj Kapoor came to Bombay in silent movies era. He was active in both theatre and films, starring in the first full-length talkie, Alam Ara (1931). He set up Prithvi Theatres, and brought to life memorable characters like Akbar (Mughal-e-Azam, 1960) and Alexander (Sikandar, 1941) onscreen. His three sons—Raj Kapoor, Shammi Kapoor and Shashi Kapoor – dominated Hindi cinema throughout the fifties and sixties.

Prithviraj’s brother Trilok Kapoor, the second son of Basheshwarnath Kapoor, entered the budding Hindi film industry in the 1930s and was one of the most commercially successful actors of the era. He had 2 sons, Vicky Kapoor, a lawyer, and Vijay Kapoor a film director.

3rd generation:
Raj Kapoor: Among Kapoors of all generations, Raj Kapoor has been the most distinguished and prolific contributor as an actor, producer, director and in enhancing Bollywood’s international reach. He is widely regarded as the greatest showman in the history of Indian cinema. Raj and Krishna Kapoor had five children: three sons, actors Randhir, Rishi and Rajiv, and two daughters, Ritu Nanda and Rima Jain.

Shammi Kapoor: He was one of the most entertaining and successful actors of Indian cinema. With films like Tumsa Nahin Dekha and Junglee, he became famous as a stylish playboy and dancing hero in the ’50s and ’60s. He married Geeta Bali in 1955. They had a son, Aditya Raj Kapoor, and daughter, Kanchan.

Shashi Kapoor: He was active from late sixties to the mid eighties, delivering several blockbusters like Sharmelee, Waqt, Haseena Man Jayegi and Satyam Shivan Sundaram. He made a popular pairing with Amitabh Bachchan and the two co-starred in a total of 12 films. He was also known internationally for starring in British and American films. He was married to English actress Jennifer Kendal from 1958 till her death in 1984, and had three children– Kunal Kapoor, Karan Kapoor and Sanjana Thapar.

4th generation:
Randhir Kapoor: After working as a child in Shree 420 (1955) and Do Ustad (1956), Randhir made his acting and direction debut with a leading role in the family drama Kal Aaj Aur Kal (1971). He starred in several films in the ’70s, but his career saw a decline in the mid-80s, after which his film appearances became fewer. Randhir married actress Babita, and had two daughters, Kareena and Karisma Kapoor.

Ritu Nanda: She was a businesswoman and insurance advisor. She was married to industrialist Rajan Nanda and had two children. Their son Nikhil Nanda is married to Amitabh Bachchan’s daughter Shweta.

Rima Jain: She is married to investment banker Manoj Jain. Her sons Armaan Jain and Aadar Jain have both made their debuts in Bollywood.

Rajiv Kapoor: He made his debut in Ek Jaan Hain Hum in 1983. He played the leading role in his father’s last directorial venture Ram Teri Ganga Maili (1985). He acted in other films like Aasmaan (1984), Lover Boy (1985), Zabardast (1985) and Hum To Chale Pardes (1988). He made his last film appearance in Zimmedaaar in 1990, after which he turned to producing and directing. Rajiv was married to architect Aarti Sabharwal from 2001 to 2003.

Aditya Raj Kapoor: He is best known for his work as an assistant director in several Hindi films and his English language directorial films like Shamaal, Don’t Stop Dreaming (2007) and Sambar Salsa (2007).

Kunal Kapoor: Son of Shashi Kapoor and Jennifer Kendal, Kunal made his debut with the 1972 English-language film Siddhartha, later acted in Shyam Benegal’s Junoon and in his first mainstream Bollywood film, Ahista Ahista. He also acted in the art films Utsav (1984) and Trikal (1985). In 1987, he stopped acting to set up his own ad film company. Kunal was married to filmmaker Ramesh Sippy’s daughter Sheena. They had two children together – son named Zahan Prithviraj Kapoor and a daughter named Shaira.

Karan Kapoor: Early in his career he was a popular model made famous by a Bombay Dyeing ad. He also acted in Sultanat (1986) and in Loha (1987) with Dharmendra. Karan now runs a photography company in the UK.

Sanjana Kapoor: She appeared in films like 36 Chowringhee Lane, Utsav, Hero Hiralal, and Salaam Bombay before quitting cinema, shifting her focus to theatre in the 1990s. She managed the Prithvi Theatre in Mumbai till 2011, and launched Junoon Theatre in 2012. Her first husband was actor and director Aditya Bhattacharya, son of filmmaker Basu Bhattacharya. She is now married to tiger conservationist Valmik Thapar.

5th generation:
Karisma Kapoor: She is the first daughter of the Kapoor family to have stepped into Bollywood. From blockbuster romances like Raja Hindustani and Dil Toh Pagal Hai, to rip-roaring comedies with Govinda and Salman Khan, Karisma displayed her whole range of talent during the ’90s. She is also known for her dancing skills, and won critical acclaim for films like Zubeidaa and Fiza. She is currently separated from businessman Sanjay Kapur, which whom she has daughter Samaira and Son Kiaan Raj.

Kareena Kapoor: She followed her sister into filmdom with Refugee in 2000. Despite a less than impressive debut, Kareena went on to bag major projects like Kabhie Khushi Kabhie Gham, Yuva, Omkara, Jab We Met, 3 Idiots and Heroine. Kareena is one of the most successful actresses in Bollywood, with over 20 years of work and counting. She married actor Saif Ali Khan and mother of two sons. She has continued to stay on top her game even after marriage and motherhood.

Ranbir Kapoor: The scion of the Kapoor family is one of the biggest stars in the country currently. His debut was a flop too, but Ranbir has more than made up for it with skillful performances in Wake Up Sid, Barfi, Raajneeti and Rockstar. In 2018 he portrayed Sanjay Dutt in Rajkumar Hirani’s biopic Sanju, one of the highest-grossing Indian films of all time. He is currently in a relationship with Alia Bhatt, the two are said to be planning a wedding soon.

Riddhima Kapoor: Ranbir’s sister is a jewellery designer married to businessman Bharat Sahni. They have a daughter named Samara.

Nikhil Nanda: Ritu Nanda’s son is married to Shweta Bachchan. They have son Agastya and daughter Navya Naveli together.

Armaan Jain: The elder son of Rima Jain and Manoj Jain debuted as an actor in Lekar Hum Deewana Dil. He is married to Anissa Malhotra.