Clans in Indian Cinema: Nanabhai to Alia Bhatt, a Camp Full of Prolific Filmmakers and Actors

In our clans in Indian cinema series, taking a look at the three generations of the Bhatt camp and their various filmi relations.

Alia Bhatt, one of the most talented actresses we have today, comes from a long line of successful filmmakers starting with her paternal grandfather Nanabhai Bhatt, who was a successful producer in the fifties. Alia’s father Mahesh Bhatt and uncle Mukesh Bhatt co-own their production house Vishesh films, known for making commercially successful and musically laden thrillers and romantic dramas. Many of their productions have starred family members including Mahesh’s elder daughter Pooja Bhatt and nephew Emraan Hashmi. Director Mohit Suri is also related to the family and has worked for Vishesh Films. The Bhatts are related to filmmakers Dharmesh and Suneel Darshan through Mukesh and Mahesh’s sister Sheila.

Here’s a look at the three generations of the Bhatt camp and their other filmi relations.

1st generation:
Nanabhai Bhatt: The Bhatt patriarch was an Indian film director and producer who worked in Hindi and Gujarati cinema. He is known for making over a hundred fantasy and mythological films, including Mr. X (1957) Lal Qila (1960) and the blockbuster Kangan (1959). His first film, Muqabala (1942), was the first to feature the double-role or ‘twins’ phenomenon in Indian cinema, wherein lead actress Nadia alternated between the good sister and the gangster’s moll. The formula was subsequently emulated in numerous Hindi films. Bhatt had five daughters and four sons, including noted film director and producer Mahesh Bhatt, Mukesh Bhatt, and Robin Bhatt. 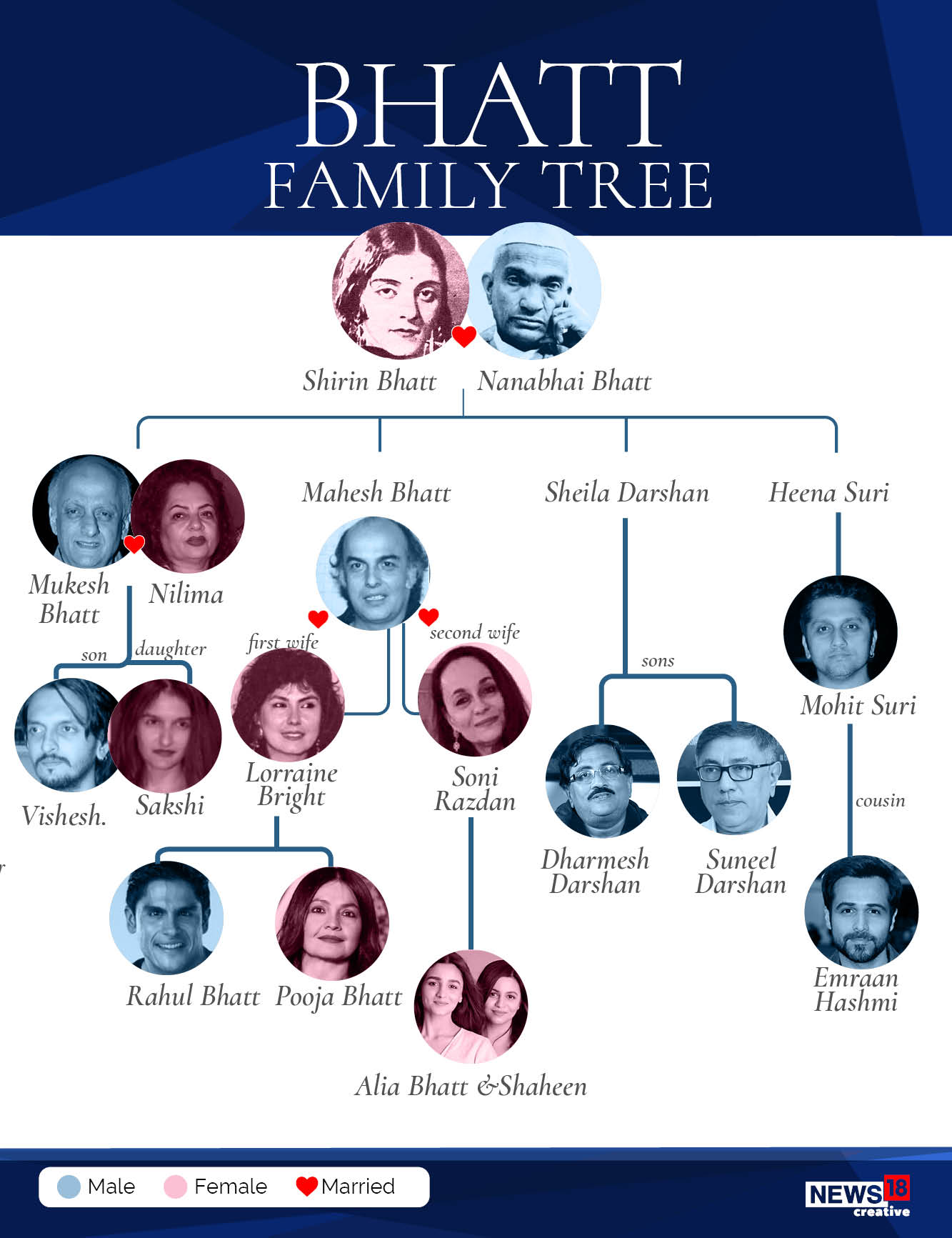 Soni Razdan: She has worked in theatre, television and film productions. She appeared as Sulochana in the hit Doordarshan TV series Buniyaad. She has played supporting roles in several films, including Saraansh and Mani in the ’80s to War and Raazi in the recent past. In Raazi she played mother to her own daughter Alia.

3rd generation:
Pooja Bhatt: She starred in several of her home productions, before becoming a producer herself. Pooja made her acting debut at age 17, in 1989 with Daddy, a TV film directed by her father Mahesh Bhatt. Her biggest solo hit and her big screen debut was the musical hit Dil Hai Ke Manta Nahin (1991) with Aamir Khan. Her most well-known films in the ’90s included Sadak, Junoon, Phir Teri Kahani Yaad Aayee, Sir, Hum Dono, Angrakshak, Tamanna, Border and Zakhm. She made her directorial debut with Paap in 2004. Pooja returned to acting in 2020 with Sadak 2, a sequel to the hit 1991 film.

Rahul Bhatt: He is a fitness trainer who was a contestant on Bigg Boss 4.

Alia Bhatt: Easily the biggest star out of the Bhatt family, Mahesh and Soni Razdan’s younger daughter is one of the most sought-after actresses in Bollywood currently. Unlike her half-sister Pooja Bhatt, she chose to debut outside their camp, with Karan Johar’s production Student of the Year. The film was a hit and set Alia forth on her success journey. Irrespective of whether her films were big successes or not, Alia has received praise for every film she has starred in. She strikes a fine balance between in out-and-out commercial fare like Humpty Sharma Ki Dulhania and more sensitive films like Highway and Dear Zindagi. She has also received wide critical acclaim for her stints in Udta Punjab (2016), Raazi (2018), and Gully Boy (2019).

Alia launched her own production company named Eternal Sunshine Productions in early 2019, with a newfound aim on fresh, relatable and non-conformist stories. She has appeared in Forbes India’s Celebrity 100 list since 2014 and was featured by Forbes Asia in their 30 Under 30 list of 2017. She has been in a relationship with Ranbir Kapoor for a while now, and are set to marry soon. Their marriage will again connect two major film families – the Bhatts and the Kapoors. Alia is very close to older sister Shaheen Bhatt, who is an author.

Vishesh Bhatt: The son of Mukesh Bhatt heads strategy, content development, creatives, marketing, and is responsible for all digital initiatives at Vishesh Films. In his capacity as a writer, filmmaker and producer, Vishesh has created several blockbuster franchises with fresh talent.

Dharmesh Darshan: He was born Dharmesh Sabharwal, the son of film producer Darshan Sabharwal by his wife Sheila, who is the elder sister of filmmakers Mahesh Bhatt and Mukesh Bhatt. He made his directional debut with Lootere (1993), at the age of 24, which he also wrote. The film was produced by his brother Suneel Darshan and was a big hit. Other films directed by him include, Mela, Dhadkan and Raja Hindustani.

Emraan Hashmi: Another successful actor from the Bhatt camp, Emraan Hashmi has starred in several musical hits since 2003. A huge chunk of his filmography is from Vishesh Films, and heavily dependent on music for their popularity. Emraan established himself as one of the leading actors of Hindi cinema with roles in several successful thrillers including Murder (2004), Zeher (2005), Aashiq Banaya Aapne (2005), Kalyug (2005), Aksar (2006), and Gangster (2006). He also portrayed a range of unconventional characters in The Dirty Picture (2011), Ek Thi Daayan (2013), and Once Upon a Time in Mumbaai (2010).

His father Syed Anwar Hashmi acted in the 1968 film Baharon Ki Manzil. His paternal grandmother, Meherbano Mohammad Ali (known by her screen name Purnima), was an actress. She later married producer-director Bhagwan Dass Varma, and was the sister of Shirin Mohammad Ali, the mother of producers Mahesh Bhatt and Mukesh Bhatt, who are thus Emraan’s uncles. He is the cousin of director Mohit Suri, with whom he has collaborated in several films. Emraan married Parveen Shahani in December 2006. The couple has a son, Ayaan Hashmi, who was born on 3 February 2010.

Mohit Suri: After working as an assistant director, Suri made his directorial debut with Zeher (2005). His breakthrough period begun with the psychological thriller Murder 2 (2011) followed by the successful musical love stories Aashiqui 2 (2013) and Ek Villain (2014). Nanabhai Bhatt was his maternal grandfather, Mahesh and Mukesh Bhatt’s sister Heena is his mother. Mohit has one sister, former actress Smiley Suri. He is married to former actress Udita Goswami.