In an Instagram Live video, during which she broke down several times, Zaira said she was on an Air Vistara flight from Delhi to Mumbai when a co-passenger sitting behind her put up his feet on her armrest. When she objected, the man reportedly claimed he was resting his feet due to “turbulence”.

New Delhi: Zaira Wasim, the 17-year-old star of women-oriented films like Dangal and Secret Superstar, took to social media on Sunday to share the horror of being subjected to sexual harassment on a Mumbai-bound flight, following which the Civil Aviation Ministry and the Directorate General of Civil Aviation (DGCA) have sought details from Air Vistara.

In an Instagram Live video, during which she broke down several times, Zaira said she was on an Air Vistara flight from Delhi to Mumbai when a co-passenger sitting behind her put up his feet on her armrest. When she objected, the man reportedly claimed he was resting his feet due to “turbulence”.

To her horror, he allegedly started caressing her neck while she was asleep. Zaira said she tried to record the harassment when she felt his hand, but couldn’t as the lights were dim.

The Mumbai police arrested the man later on Sunday night. Sources, however, did not immediately reveal the identity of the man nor gave any other details.

Recording the Instagram video immediately after deboarding, Zaira said, “This is not done, I am disturbed… Is this how you’re going to take care of girls?”

“This is not the way anybody should be made to feel this is terrible!” she said fighting tears.

Zaira also expressed her disappointment at Vistara’s cabin crew, saying they failed to help her.

In a statement issued later, Vistara said it was carrying a “detailed investigation” and expressed support for Zaira.

We @airvistara have seen the reports regarding @ZairaWasimmm experience with another customer on board last night. We are carrying out detailed investigation and will support Zaira in every way required. We have zero tolerance for such behaviour.

We @airvistara have seen the reports regarding @ZairaWasimmm experience with another customer on board our flight last night. We are investigating fully and will support Zaira in every way required. We have zero tolerance for this kind of thing.

A source in Vistara told CNN-News18 that Zaira "yelled" mid flight, but the cabin crew couldn't help since the aircraft had begun its descent. “When the flight took off, the male passenger had said that he should not be disturbed and went off to sleep. As the flight was descending, Zaira started yelling. The crew could not come forward at that point of time because the flight was landing and everyone was buckled up. After the flight landed, the crew even asked her mother whether she wanted to file a complaint to which they said no and rushed out of the flight.”

Weighing in on the incident, NCW chief Rekha Sharma questioned why the co-passengers and cabin crew didn’t come to the actor’s rescue. “It is a horrible incident. Women are not safe anywhere. Co-passengers not reacting is the worst. Why didn’t the crew help? I am going to take action against Vistara.”

A team of Mumbai Police recorded Zaira's statement at a Mumbai hotel where she is staying. Later, an FIR was registered at Sahar Police Station against unknown person under Section 354 of the IPC and under the Protection of Children from Sexual Offences Act (POCSO).

A police officer arrived at the hotel in Mumbai where #ZairaWasim is staying to take her statement over her allegations of molestation attempt on a Delhi-Mumbai Vistara flight. pic.twitter.com/KAHH056w8a

Speaking to CNN-News18, Zaira’s manager Tuhin Mishra said, “This is shocking. Zaira approached cabin crew but they didn’t react. We have written to Vistara. We will file a police complaint. She is in a state of shock.”

Along with the video, the actor also shared screenshots of the recording she managed to make. 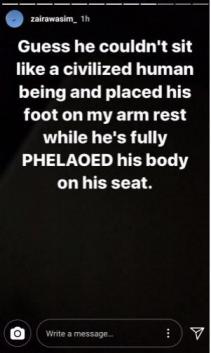 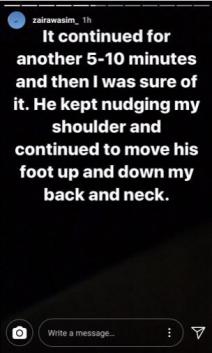 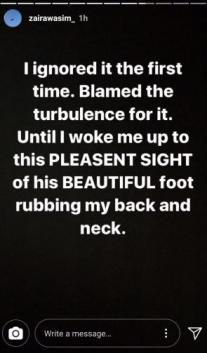 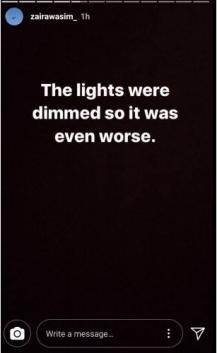 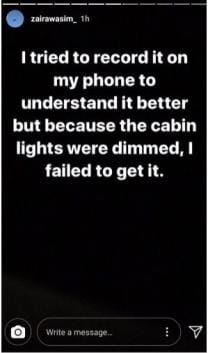 Supporting Zaira, who hails from Kashmir, former J&K chief minister Omar Adbullah said the passenger should be identified and action taken against him.

The passenger should be identified to the police by @airvistara & a case filed for legal action. None of this “he fell at my feet so I forgive him” rubbish! https://t.co/1umbBOOGAu