The first pictures of Ranveer Singh and Deepika Padukone from their destination wedding are out.

The wait is finally over. After tying the knot in an intimate ceremony in Italy's Lake Como, the first pictures of newlyweds Ranveer Singh and Deepika Padukone post the ceremonies are out, and they will definitely melt your hearts.

In the pictures, taken by Associated press, Deepika can be seen dressed in an off-white lehenga with gajra in her hair. While Ranveer is wearing a traditional white outfit. The couple married in a traditional Konkani ceremony which reportedly took place early in the morning at 7am.

Take a look at their pictures: 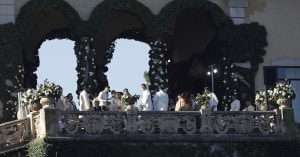 "No pictures but it was love personified to see them together today. Couldn't stop my tears, but these were tears of happiness and so I hope they never do. #DeepVeerKiShaadi #ranveerkishaadi #foreverlove," she wrote on the microblogging site.

Singer Harshdeep Kaur, who reportedly performed at the sangeet ceremony Tuesday, had to take down a picture from social media, that showed her and her husband standing near the picturesque lake. But the screenshot of the now deleted photo is already viral on social media.

Further, an Anand Karaj ceremony, as per Sikh traditions, will be held on Thursday. The two actors, who have worked in films like Bajirao Mastani and Padmaavat, were engaged on Tuesday morning.

During the engagement ceremony, Ranveer went down on his knees asking for Deepika's hand. After they exchanged rings, he gave a speech that made Deepika emotional.

An intimate dinner was held which was followed by a dance session, which was joined by the couple along with Singh's father Jagjit Singh Bhavnani.

Reports say the bride was in tears throughout the henna ceremony.

However, the two have made sure to take every possible step to make their special day as private as possible. There is apparently a strict no-photos policy is in place for the guests at the venue.
Tags: