Deepika Padukone recently underwent a makeover before jetting off to Goa for her next film.

Actor Deepika Padukone, who is currently in Goa to shoot her new film with director Shakun Batra, on Friday shared a picture on Instagram Stories, teasing fans about the project. Sharing a picture of rich blue skies with a lone coconut tree in the wind, Deepika wrote: "3 days to go."

Now, it is not clear what it is about but going by the tags with the photo, it appears to be something related to her new film with Shakun. Deepika tagged Dharma Productions, Shakun, co-stars Siddhant Chaturvedi, Ananya Panday and Uri actor Dhairya Karwa. Check out the picture here: 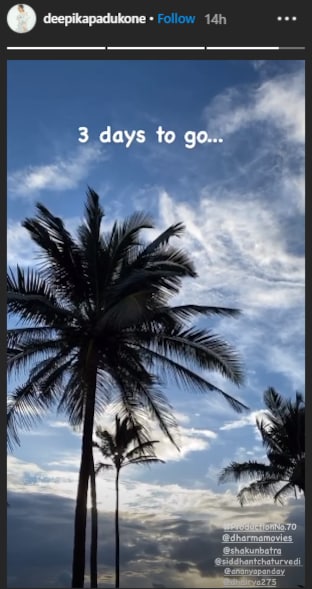 Deepika on Friday left for Goa to shoot the untitled next. According to the reports, the actor will stay in Goa for two months to shoot the film. Deepika recently underwent a makeover before jetting off for her next in Goa. The actress went for a hair cut to slip into the shoes of her upcoming character. The pictures of her transformation were shared by her hairstylist Clarabelle Saldanha who treated the fans with the amazing new look of the actress.

Described as a relationship drama, Shakun said the film will see its character finding themselves "stuck in a morally ambiguous zone". Deepika Padukone was last seen in Meghna Gulzar's 'Chhapaak'. The film chronicles the story of acid attack survivor, Laxmi Agarwal. The movie received rave reviews from fans. Now, Deepika is awaiting the release of her upcoming film, '83', alongside husband, Ranveer Singh. '83', helmed by Kabir Khan, chronicles the story of India's 1983 Cricket World Cup triumph.