Legendary actor Dilip Kumar left for his heavenly abode on the morning of July 07. The actor, who passed away at the age of 98,was popularly known as the ‘Tragedy King’ of Bollywood. In a career of over 5 decades, the method actor had explored various genres including romance, drama, comedy, among others.

For a long time, Kumar had been battling with ill health therefore, he was admitted to the Intense Care Unit (ICU) of a Mumbai hospital multiple times. Recently the actor was admitted on June 30. From Bollywood celebrities to politicians, people mourned the loss of a prolific actor.

The news of his death was shared on the official Twitter page of the actor. “We are from God and to Him we return,” wrote Faisal Farooqui as he shared the heart-wrenching news.

With a heavy heart and profound grief, I announce the passing away of our beloved Dilip Saab, few minutes ago. We are from God and to Him we return. - Faisal Farooqui

Expressing grief on Kumar’s demise, Prime Minister Narendra Modi said that ‘his passing away is a loss to our cultural world.’ PM Modi said that the actor will be remembered as a cinematic legend.

Dilip Kumar Ji will be remembered as a cinematic legend. He was blessed with unparalleled brilliance, due to which audiences across generations were enthralled. His passing away is a loss to our cultural world. Condolences to his family, friends and innumerable admirers. RIP.— Narendra Modi (@narendramodi) July 7, 2021

Congress leader Rahul Gandhi expressed his heartfelt condolences to the family, friends, and fans of Kumar. He wrote that actor’s extraordinary contribution will be remembered for generations to come.

My heartfelt condolences to the family, friends & fans of Dilip Kumar ji. His extraordinary contribution to Indian cinema will be remembered for generations to come. pic.twitter.com/H8NDxLU630

Referring to him as an ‘outstanding’ actor and a ‘true thespian,’ Defence Minister Rajnath Singh said that Kumar’s demise is a monumental loss to the Indian cinema. He also remembered his first meeting with the legendary actor.

Shri Dilip Kumar ji was an outstanding actor, a true thespian who was well regarded by everyone for his exemplary contribution to the Indian film industry. His performances in films like Ganga Jamuna touched a chord in millions of cinegoers. I’m Deeply anguished by his demise.

I had met Dilip Kumar ji in person when I went to Mumbai to present the Padma Vibhushan to him. It was a special moment for me to interact with the legendary actor. His demise is monumental loss to the Indian cinema. My heartfelt condolences to his family, friends and fans.

Bollywood actor Akshay Kumar took to Twitter and wrote that Kumar has taken away an entire era of Indian cinema with him. Akshay said that for people there are heroes but for every actor, he was ‘The Hero.’

To the world many others may be heroes. To us actors, he was The Hero. #DilipKumar Sir has taken an entire era of Indian cinema away with him.My thoughts and prayers are with his family. Om Shanti pic.twitter.com/dVwV7CUfxh— Akshay Kumar (@akshaykumar) July 7, 2021

Tusshar Kapoor penned a short note on the passing away of the ‘Tragedy King.’ From Mughal-e-Azam to Saudagar, Tusshar said that he has left the generations spellbound by his magic on screen and audience.

Esha Deol also extended her deepest condolences to Saira Banu and the family.

#DilipKumar ji we will miss you. Deepest condolences to #SairaBanu ji & the family May his soul rest in peace. pic.twitter.com/jvLQVQZK7j— Esha Deol (@Esha_Deol) July 7, 2021

My heartfelt condolences to friends , family members and numerous fans of #DilipKumar Saab on his demise . His unparalleled contribution to Indian Films & it’s s holistic development will be remembered through generations. pic.twitter.com/7rnTra5m3j— Hemant Soren (@HemantSorenJMM) July 7, 2021

Filmmaker Madhur Bhandarkar was also ‘saddened’ by the demise of the veteran actor.

Saddened to know about the demise of Dilip Kumar sir, One of the greatest actors and doyen of Indian Cinema, a Legend. He inspired generations of actors and will always be missed. RIP pic.twitter.com/xTjO4FF6yS— Madhur Bhandarkar (@imbhandarkar) July 7, 2021

T 3958 - An institution has gone .. whenever the history of Indian Cinema will be written , it shall always be 'before Dilip Kumar, and after Dilip Kumar' .. My duas for peace of his soul and the strength to the family to bear this loss .. Deeply saddened .. — Amitabh Bachchan (@SrBachchan) July 7, 2021

The greatest. There will never be another Dilip Kumar. pic.twitter.com/SqQyykrPe9— Hansal Mehta (@mehtahansal) July 7, 2021

I am so heartbroken by d news that the ‘King of Cinema’ DILIP KUMAR has passed away.I admired him as an actor & respected him as he was my fathers first cousin frm Peshawar. Therefore I called him Yusuf ‘Lala’. He was very loving to me. ‘Khuda Paiman Lala jan’.#DilipKumar pic.twitter.com/37RbzFb9EP— Adnan Sami (@AdnanSamiLive) July 7, 2021

Saddened by the demise of #DilipKumar sahab, one of the greatest actor and doyen of Indian Cinema. My thoughts and prayers are with his family. ॐ शांति pic.twitter.com/uOS2y1Csi9— Manoj Joshi (@actormanojjoshi) July 7, 2021

I must have been all of 4 yrs old whn i saw my 1st stampede.. @TheDilipKumar had walked into a wedding reception,the guests went mad, especially the women,the stage broke! there was hysteria.#LEGEND.. my deepest condolences to #Sairaji n his family.His legacy continues— TheFarahKhan (@TheFarahKhan) July 7, 2021

At Kumar’s residence, celebrities like Shah Rukh Khan, Vidya Balan, Karan Johar, Shabana Azmi, Chief Minister Uddhav Thackeray, Dharmendra among many others arrived to pay their tributes before his remains were to be taken for burial. they offered condolences to Saira Banu. 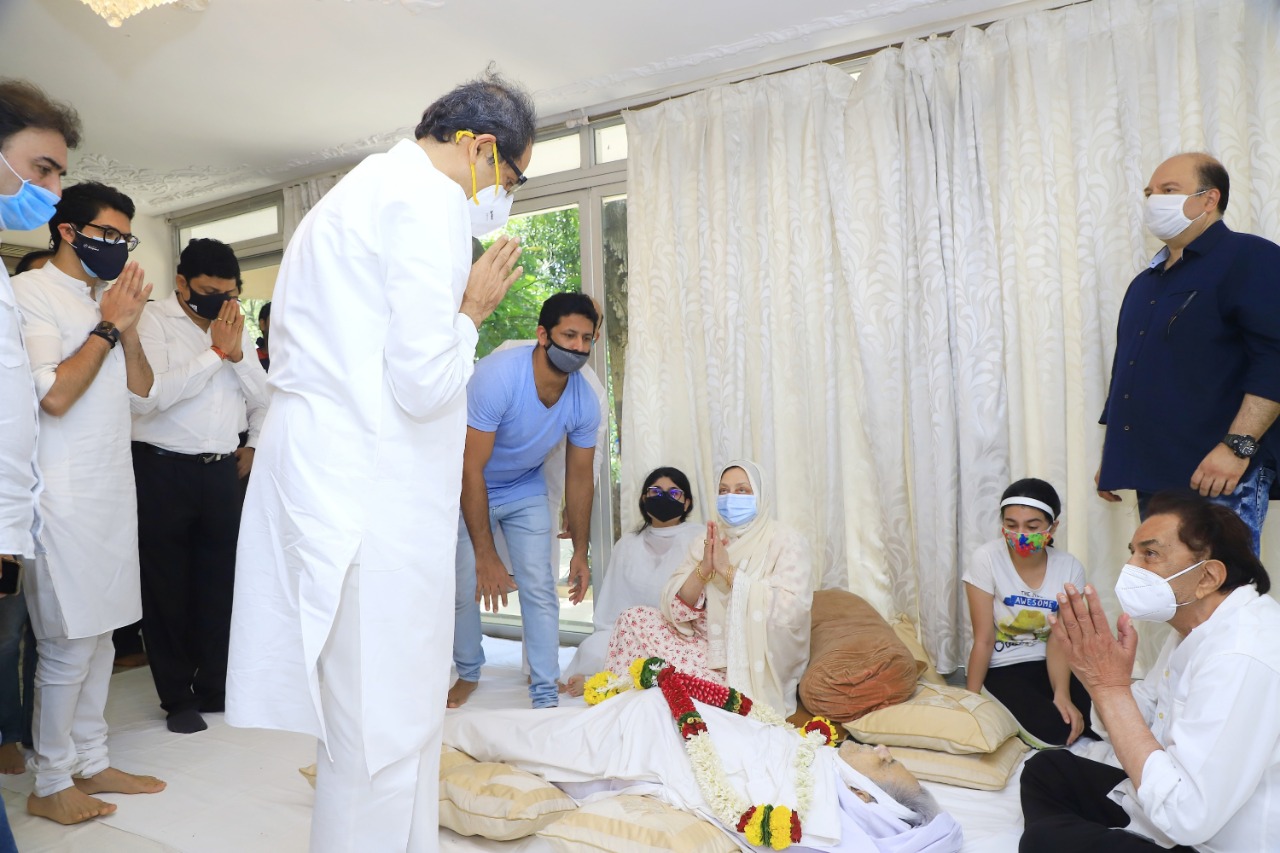 Dilip Kumar was aged 98. His wife Saira Banu survives him.