Dilip Kumar Dies at 98, Live Updates: Dilip Kumar was taken to Juhu Kabristan, where the film fraternity and thousands of fans lined up to bid him an emotional farewell.

Dilip Kumar Dies at 98, Live Updates: Legendary actor Dilip Kumar was buried in Mumbai on Wednesday with full state honours. Wrapped in the national flag, Dilip Kumar was taken to Juhu Kabristan, where the film fraternity and thousands of fans lined up to bid him an emotional farewell. Amitabh Bachchan and his son Abhishek Bachchan attended the burial ceremony, while a tearful Saira Banu looked on. The Indian cinema legend breathed his last at Mumbai’s Hinduja Hospital on Wednesday morning following a prolonged illness. He was 98. Maharashtra chief minister Uddhav Thackeray and several Bollywood A-listers including Shah Rukh Khan, Ranbir Kapoor, Karan Johar and Vidya Balan visited the legendary actor’s Bandra residence to meet his wife Saira Banu.

Dilip Kumar, known to generations of cine-goers as ‘tragedy king,’ was rushed to the hospital on June 30 after complaining of breathlessness. His family friend Faisal Farooqui confirmed the news of the actor’s death on Twitter. “With a heavy heart and profound grief, I announce the passing away of our beloved Dilip Saab, a few minutes ago. We are from God and to Him we return,” read Farooqui’s tweet via Dilip Kumar’s official Twitter handle.

Dilip Kumar was first admitted to the hospital on June 6 and was put on oxygen support and stable. A tweet from the actor’s official handle had shared this update: “Don’t believe in WhatsApp forwards. Saab is stable. Thank you for your heartfelt duas and prayers. As per doctors, he should be home in 2-3 days.” Dilip Kumar was later discharged on June 11. Dilip Kumar, the 'Tragedy King' and 'First Khan' of Bollywood, breathed his last at 7:30am on July 7 morning.

Aamir Khan paid tribute to the legend, thanking him for the "invaluable, priceless and unique gift" he has given to all his fans through his work. 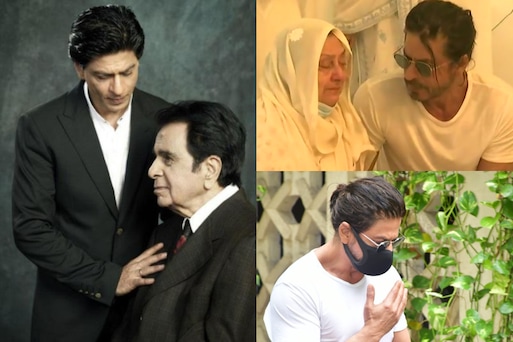 Legendary Hindi cinema actor Dilip Kumar passed away at the age of 98. Take a look at glimpses from his last journey.

Kriti Sanon posted a long note on Instagram urging the paparazzi to be more sensitive while covering Dilip Kumar's funeral. "A funeral is a very personal affair and media should let people mourn in peace without a camera flashing in their faces! It's disturbing to see videos of such a sensitive event with photographers talking casually in the background," she wrote. "Yusuf Saab's contribution to the Arts is invaluable and irreplaceable. Today the curtains have come down on one of India’s greatest. An end of an era. My condolences to Saira ma’am and the family. Rest in peace," wrote Priyanka Chopra in her tribute.

READ | An Encounter with Dilip Kumar and a Compliment Most Cherished 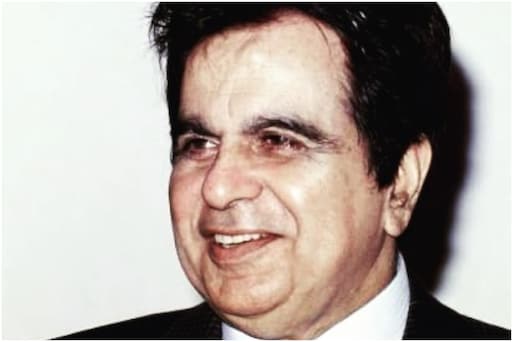 Brief encounters with people sometimes find a special place in our memory.

Amitabh Bachchan arrived at the Juhu Kabristan with son Abhishek. Bachchan and Dilip Kumar was co-stars in the 1982 film Shakti. In his tribute to Kumar, Bachchan had tweeted, ""An institution has gone... Whenever the history of Indian Cinema will be written, it shall always be 'before Dilip Kumar, and after Dilip Kumar'." Dilip Kumar was one of the greatest institutions of Hindi cinema who bedazzled the audiences each time he appeared on screen in his near-six decades career.

Dilip Kumar was buried at Juhu Kabristan in Mumbai. The actor breathed his last at Hinduja Hospital at 7:30 am today. His wife Saira Banu was by his side in his last moments.

Dharmendra on Dilip Kumar: Extremely sad to lose my most affectionate brother

Veteran actor Dharmendra took to his Twitter account to mourn the demise of Indian cinema legend Dilip Kumar, who passed away early in the day at the age of 98. Dharmendra wrote: "Extremely sad to lose my most affectionate brother in the industry. Jannat naseeb ho, Hamare Dalip Sahab ko (May he rest in heaven)." Saira Banu was only 22 when 44-year-old Dilip Kumar proposed marriage to her. They tied the knot in 1976.

Dilip Kumar's funeral is taking place with full state honours at Juhu Qabrastan in Mumbai. The legendary actor died at a Mumbai hospital on Wednesday after a prolonged illness. He was 98 Goa Chief Minister Pramod Sawant on Wednesday paid tribute to Indian film icon late Dilip Kumar, who died following a prolonged illness earlier on Wednesday. "Late superhero Dilip Kumar died today. On behalf of the people of Goa and the Goa government, I offer my condolences. He was a superhero. He acted in so many films," Sawant said.

Saddened to hear about the passing away of legendary actor #DilipKumar. He was a doyen of Indian Cinema and a prolific entertainer. Deep Condolences to the grieving family & fans. pic.twitter.com/ksSqi9D2O9

READ | What Happened to Dilip Kumar's Peshawar Home After the Actor Left for India in 1935? 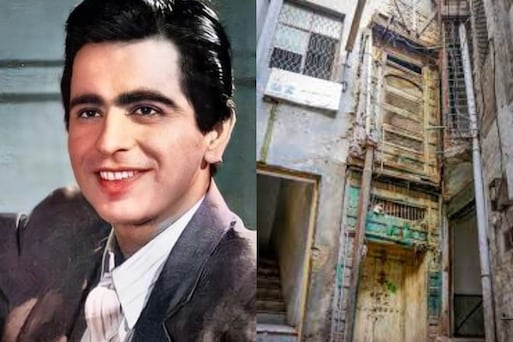 Late actor Dilip Kumar was born in Pakistan in 1922, before shifting to India in 1935. Here's what happened to his ancestral house in Pakistan.

Draped in the tricolour, Dilip Kumar embarks on his final journey. Visuals of mortal remains of the legendary actor being taken to Juhu Muslim Cemetery in Santacruz West.

Veteran actor Dilip Kumar's family, friends gather at his residence ahead of his State funeral, which will be held today at 5 pm in Santacruz, Mumbai.

Veteran actor Dilip Kumar's family, friends gather at his residence ahead of his State funeral, which will be held today at 5 pm in Santacruz, Mumbai. The actor passed away this morning at the age of 98. pic.twitter.com/eY9wh2XQZn

Dilip Kumar was a Generous Co-star, Feel Lucky to Have Acted with Him: Helen

Yesteryear actress Helen recalls the time she spent with Dilip Kumar on the sets of Ganga Jamuna (1961) and Bairaag (1976). "I feel lucky to have shared screen space with him. He was a kind and caring person. I still remember I was really nervous but he was so helpful. He sat with me and told me not to be nervous. He was a very generous co-star," Helen told News18's Sonil Dedhia. READ the full story here.

Nawazuddin Siddiqui shared via his Instagram account, "The Greatest in the World Of Cinema. An Institution, An Inspiration & “The Pause”. The Thespian, me & my father admired closely and had watched all his work. His craft could be felt but can never be described in words. #RestInPeaceLegend #DilipSaab." (sic)

Tributes and condolences continued pouring in from the film fraternity for late legend Dilip Kumar all through Wednesday. The veteran actor passed away in a Mumbai hospital aged 98 in the early hours of the day. Actors, singers, filmmakers and others associated with the film industry, especially whose lives he had touched, took to social media to mourn his demise, recall their experiences of meeting him and working with him, and offered their condolences to the bereaved family and his wife, veteran actress Saira Banu. Legendary actor Dilip Kumar passed away on Wednesday, July 7 at the age of 98. Here is a look at the timeline of his marriage with Saira Banu.

TV star Urvashi Dholakia has penned a heartwarming tribute to the late legendary actor Dilip Kumar. "I have been very very fortunate enough to work with him so closely where he has practically sat down and taught me Urdu."

Pakistan Prime Minister Imran Khan tweeted, "Saddened to learn of Dilip Kumar's passing. I can never forget his generosity in giving his time to help raise funds for SKMTH (cancer hospital he set up in memory of his late mother) when (the) project launched. This is the most difficult time - to raise (the) first 10% of the funds & his appearance in Pak and London helped raise huge amounts. Apart from this, for my generation, Dilip Kumar was the greatest and most versatile actor."

Saddened to learn of Dilip Kumar's passing. I can never forget his generosity in giving his time to help raise funds for SKMTH when project launched. This is the most difficult time - to raise first 10% of the funds & his appearance in Pak & London helped raise huge amounts.

We are deeply saddened to hear about the demise of the legendary Indian actor Dilip Kumar Ji. He was famous & admired in Israel as well. We offer our heartfelt condolences & prayers to his family & friends. 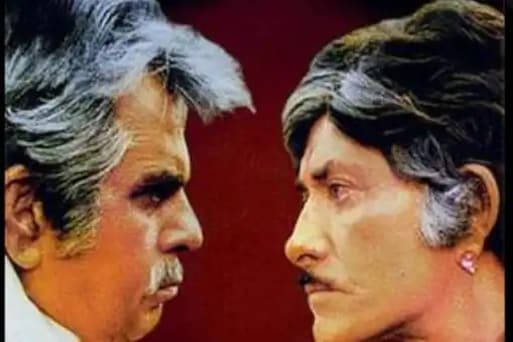 For around 30 years after 1959, Dilip Kumar and Rajkumar were not seen together in any film.

Dilip Kumar had been in and out of hospitals in the last one month and the family was hoping he would get better. On Monday, Saira Banu had confirmed that he was recovering and might soon return home. She had also shared an update about his health on Twitter. “We are grateful for God’s infinite mercy on Dilip Sahib that his health is improving. We are still in hospital and request your prayers and duas so that Insha’Allah he is healthy and discharged soon. Saira Banu Khan (sic),” read her tweet via Dilip Kumar’s official handle.

Dilip Kumar, born Yousuf Khan and often known as the Nehruvian hero, had appeared in some of Indian cinema’s most iconic and path-breaking films. His career spanned over five decades with landmark films like “Mughal-e-Azam,” “Devdas,” “Naya Daur,” and “Ram Aur Shyam.” His last big-screen appearance was in the 1998 film “Qila”. The thespian was honoured with the Dadasaheb Phalke award in 1994 and the Padma Vibhushan in 2015 for his contribution to Indian cinema.