Disha Patani shared a picture of her sister Khushboo, who is a Lieutenant in the Indian Armed Forces. She inscribed the image with a heart-shaped emoji.

Disha Patani, who is quite popular on Instagram for her workout videos, acrobatic and athletic clips and sartorial elegance, took to Instagram recently and inspired the world in a totally different way. She shared a picture of her sister Khushboo, who is a Lieutenant in the Indian Armed Forces.

Time and again, in interviews, Disha has referred to Khushboo as her idol and claimed that her sister inspires her to do better each day. She has also shared how much she respects Khushboo for what position she is at in her life. Sharing Khushboo's image, as dressed in the army uniform, Disha inscribed the still with a heart-shaped emoji. See Disha's post here: 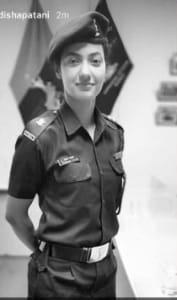 On the movies front, Disha's Bharat is lined up for release on June 5. The trailer of Salman Khan and Katrina Kaif- starrer Bharat will debut online on April 24. Disha will play the role of an acrobatic-athlete in the film. In one of the posters from the film, she can be seen dressed in a golden, embellished outfit, effortlessly hanging from a ring that hovers in mid-air. In Bharat, she is seemingly part of a circus troupe for which Salman too will perform stunts.

In another film, which is being directed by Mohit Suri, she will be seen opposite Aditya Roy Kapur, Anil Kapoor and Kunal Kemmu. Mohit's film is titled Malang and will release on February 14, 2020. Disha's character in Malang is unclear at this moment. However, even after the grand success of Baaghi 2, she will not be seen opposite Tiger Shroff in Baaghi 3.