Dressed in grey sports bra and black shorts, Disha Patani completed her at home workout look with a pair of white socks.

Actress Disha Patani shared yet another stunning picture of her fit body on her Instagram stories. In the video, she can be seen flaunting her toned body in front of the mirror as she clicks away for the gram. She is sporting her workout attire and is accompanied by her furry friends in the background. Clad in a grey sports bra and black shorts, she completed her look with a pair of white socks. On a closer look a treadmill can also be spotted in the room. The actress has also added the track titled Leave The Door Open by Bruno Mars on her story.

In another story, she has shared a picture from the same moment. The only difference is that she has put a sunflower GIF in the place of her face and has added a dog emoji on her pet’s face. Another unmissable element is the cutesy pink paw pop-socket on her mobile phone. 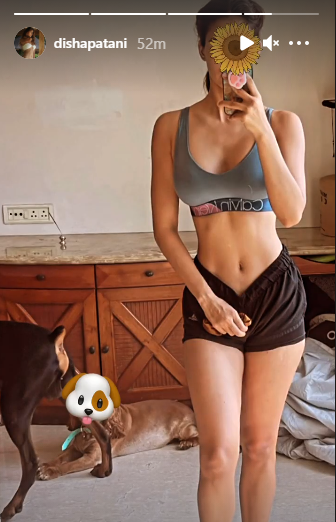 The actress has also extended birthday greetings to legendary actor Jackie Chan in one of her stories.

Disha who enjoys a fan following of over 42 million users on Instagram has been quite a regular in sharing her workout videos. Recently, she had shared a snippet in which she could be seen doing some very intense weight training. The clip had gone viral on the platform with over two million views and thousands of comments. Many users wrote how she has become a fitness inspiration while some opined that her perfect body is a result of her determination and dedication.

On the work front, she will soon be seen starring alongside Salman Khan, Randeep Hooda, Jackie Shroff and Megha Akash in Radhe. The movie is being directed by Prabhu Deva and is being bankrolled by Salman Khan, Sohail Khan and Atul Agnihotri. The hindi action film is scheduled to release on Eid al-Fitr, which is on May 13.