Drake wore a t-shirt with a black and white photo of the late rapper Sidhu Moose Wala with his birth and death years written below it.

Drake paid an emotional tribute to late rapper Sidhu Moose Wala during his Toronto Concert. The American rapper donned a t-shirt with Sidhu’s photo on it. It was a black and white photo of the late rapper with his birth and death years written below it. He was performing in Canada on July 28. Pictures from the event went viral on social media which left his fans emotional. Sidhu’s Instagram page, which is run by his family also shared the photo.

Take a look at it: 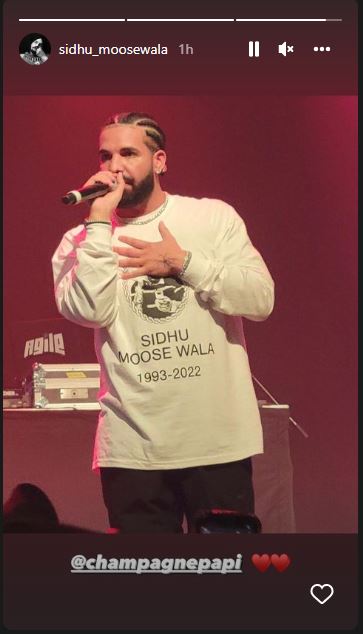 This is not the first time Drake is paying a tribute to Sidhu Moose Wala. A day after his death, the American rapper took to his social media handle to offer condolences to the Punjabi singer-turned-politician. Drake took to his Instagram Story section to share a photo of Sidhu sitting with his mother and wrote, “RIP Moose." He also added a bird emoji. Draka also used to follow the Indian artist on Instagram.

Meanwhile, Sidhu’s parents got his face inked on them as a tribute to their late son. Moose Wala’s father got his son’s portrait inked on his arm. A short video was shared by the paparazzi account, where Balkaur Singh was seen lying on a couch while getting his tattoo done. Along with the portrait of Sidhu Moosewala, his father also inscribed ‘Sarwan Putt’ on his arm in Punjabi, which means obedient and caring son. According to various media sources, the late singer’s mother Charan Kaur also got it inked.

Punjabi singer Sidhu Moose Wala was shot dead on May 29 at a village in Punjab’s Mansa a day after the Bhagwant Mann government controversially withdrew his security cover. The singer was rushed to a local hospital where the doctors declared him dead.