Hobbs and Shaw delivers more than what it promises. It’s a solid adrenaline-pumping film with an unwavering focus.

Branching out of a franchise like The Fast and the Furious without its most known face Vin Diesel demonstrates the production house’s faith in the relatively newer entries to the series, and the makers were not wrong in their assessment as the charm of Dwayne Johnson and cynicism of Jason Statham make a heady cocktail which makes you whistle at the top of your lungs. It’s one of those spin-offs that makes you totally ignore how it could have looked with the original star-cast.

Add Idris Alba’s half-human, half-robot tinge to it, of course with his peculiar swag that makes you wonder why he isn’t playing James Bond yet, and you get 132-minutes of ridiculously thrilling action scenes and some surprise casting to speculate more such films in the series.

Let me be clear—this could have worked as a standalone film too. It doesn’t need the Fast and the Furious tag to get our attention. That must have helped though. There is a definitive drift in the tone of the action scenes from the original franchise. It’s not about judiciously consuming less nitrous oxide for more thrust anymore. Slow motion uppercuts and Ukrainian scientists have also crept into the lives of Johnson and Statham.

What hasn’t changed one bit is the idea of family being the place of timely returns. Luke Hobbs (Johnson) goes back to Samoa and Deckard Shaw (Statham) travels to his childhood. That is also the cue for Deckard’s sister Hattie (Vanessa Kirby) to throw some punches and their mother Magdalene (Helen Mirren) to say a couple of done to death things about family. In short, family is probably the only emotion worth dying for.

You also meet Idris Alba pouring his heart out and trying to add some mortality in the insane action drill planned every 10 minutes. You’re almost a robot, why don’t you do what others are doing, which is killing people for just being in your range. Because when he does it, he looks far more stylish than the two guys brought together for the franchise. 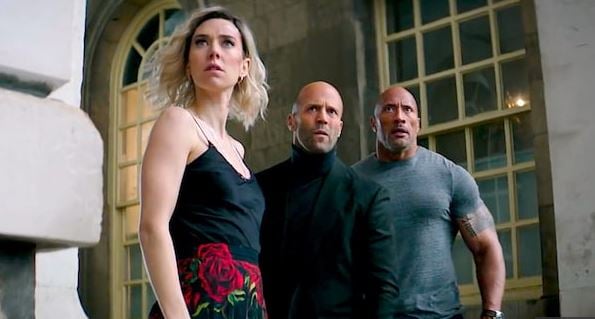 You may differ but The Fast and the Furious films have been mostly about that one action scene which could make you go crazy in your seat. Whether Paul Walker would cut the corner in time or would Letty get hold of her subconscious before it gets too late. This time, the director David Leitch discards the idea of leading up to that one breaking point and lays his canvas evenly. You get to know more about the people behind tough exteriors and unbelievable muscles.

The sharp one-liners, banters and other tried and tested breathers such as cameos and occasional-vulnerable-colourful funnymen, are all present in Hobbs and Shaw. Writing wise, the tone has been the same, maybe a little less serious. Vin Diesel’s absence means for something after all, no?

Hobbs and Shaw is so heavy in action, which is what we cared for initially, that you would look for occasional kisses or maybe a dance number. Instead, you get Roman Reigns maneuvering his way to the camera with a spear in hand.

Anyway, it delivers more than what it promises. It’s a solid adrenaline-pumping film with an unwavering focus. It’s pure fun and you don’t even need to bother about what The Rock is cooking.

A former film student himself, Rohit 'Vats' feels that a good film is made with a zealous heart rather than brilliant technique. He thinks that films ...Read More