As Mumbai set out to vote in the fourth phase of the Lok Sabha elections in Maharashtra, Bollywood's star kids were spotted at various polling booths. From siblings Ahan and Athiya Shetty to Taimur Ali Khan and Yug Devgn, Mumbai elections turned out to be a star-kids-studded affair. As per estimates, nearly 12.79 crore people are eligible for voting in the fourth of the seven-phase elections.

Sunil Shetty and wife Mana were accompanied by kids Ahan and Athiya Shetty, as the family turned out to vote. 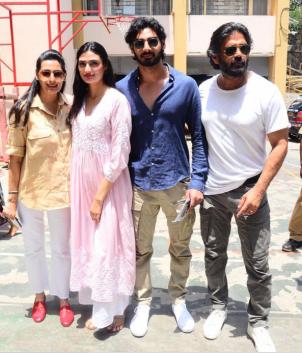 Shah Rukh Khan came out to cast his vote with son AbRam and wife Gauri. AbRam was spotted wearing different coloured shoes on each foot.

The ever-adorable Taimur Ali Khan came along with mother Kareena Kapoor to the polling station.

In another instance, Ajay Devgn was accompanied by wife Kajol and son Yug, as the celebrity couple turned up to cast their ballot.

Tiger Shroff also came out to vote, although unaccompanied. He was dressed in casual sleeveless T-shirt and cargo pants, as he headed towards the booth.

#tigershroff quickly votes before he leaves for Ahmedabad. No excuses, a little discipline can make the difference. He will not miss his flight either 👍👍🇮🇳#elections2019 #indiavotes #mumbaikarvote #bollywoodvotes @viralbhayani

In another picture, father-son duo- David Dhawan and Varun- turned up on the big day. Varun was seen helping an old lady climb stairs outside the polling booth and the image is now winning the internet.

Esha Deol accompanied her mother and BJP MP Hema Malini to the polling station. The mother-daughter duo were snapped outside one of the centers, dressed in traditional Indian outfits.

Also See: 5 Political Masterstrokes That Changed the Fate of Elections