'Got To Know The Human Behind The Star': TZH Actress Anupriya Goenka On Working With Salman Khan

You might not have noticed her in the hundred odd commercials that she starred in or recognized her in films like Daddy, Bobby Jasoos and even Dishoom, but you certainly could not have ignored her in Salman Khan and Katrina Kaif-starrer Tiger Zinda Hai (TZH).

Dusky beauty Anupriya Goenka, who essayed the role of Poorna -- one of the 40 nurses held hostage by terrorist organisation headed by Abu Usman, portrayed by Sajjad Delafrooz, in the box office hit film TZH -- is no newcomer to Hindi Film industry. But, the closest Goenka came to being recognised before TZH released was when she played a lesbian character in a clothing brand's commercial in 2015. However, it took a blockbuster film for people to notice the very talented Anupriya Goenka.

So, can we say that this was something that Goenka was hoping for? A big Bollywood break in a film that starred a superstar? "I have never thought of which kind of movie will give me the big break. I have always been more cautious of the roles that I have played. But, yes TZH has become the big Bollywood break for me because when there is a Yash Raj production, Ali Abbas Zafar directing and most of all Salman Khan spearheading the whole film, then the public reach of the film is unparalleled. But, for an actor the most important thing is for their work to come out, to reach out to the masses and TZH gave me that," said actress Anupriya Goenka in an exclusive chat with News18.com.

"It's a very credible project to be a part of. It is the biggest movie break that I have got and it has set a big platform for me. For this, am really grateful to YRF and Ali for having faith in me," Goenka added.

Somehow managing to describe her emotions on being flooded with appreciation for playing the intense character of Poorna so well in the film, Goenka, while expressing her inability to put into words how blessed and happy she was with all the appreciation for her fabulous performance in TZH, said, "I don't have words. It's amazing. In fact, it's beyond amazing, I'm overwhelmed. It's when you have worked very hard for several years, for the last 4-5 years in acting in my case, and then finally you get to work on a project like this that you are so proud of and people appreciate it as well, it just feels like all your decisions were right."

Crediting her fantastic performance to YRF, Salman Khan and Ali Abbas Zafar, Goenka added that more than just being overwhelmed, when such appreciation comes one's way, as an individual, it gives an artiste a sense of surety that if you work hard, pursue your passion, you have the right intent, things fall in place. 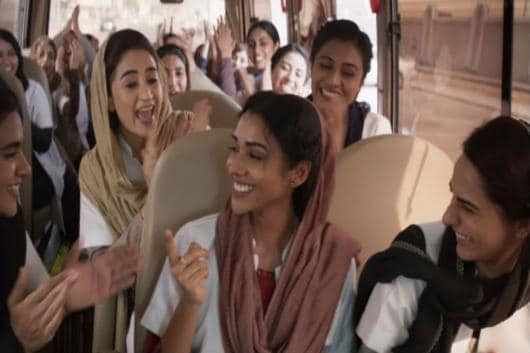 Asked if she was intimidated by the presence of a superstar -- Salman Khan -- on the sets, Goenka revealed that more than intimidation it was about the excitement and the fan-girl moment. "When I first met Salman sir, I was a little scared for sure. But, it was coming more from excitement rather than fear, because after having idolized somebody for so long, having loved his work, then to meet him in person and being his co-actor, that was a huge honor but it also gave me butterflies in my stomach," said Goenka.

Reflecting on what it was like working with the Bhaijaan of Bollywood, Goenka said, "He (Salman Khan) is such an easy person to work with. He was always there to support, to guide, to make one feel comfortable. He is extremely welcoming to newcomers because he knows their journey, he knows how it feels, so, he was always there as a guiding factor. He is very simple as a human being. I got to know the human behind the star and fall in love with him all over again."

Elaborating on her fan-girl moment, Goenka confessed that although there were many, her first meeting with Salman Khan, where she was introduced to the star, is the most memorable one.

When asked about if she looks up to someone for acting inspiration, Goenka said that Vidya Balan has been an actress that she has always liked for the kind of films and roles that the latter has taken up in her acting career. "I have always idolized Vidya Balan a lot. I relate a lot to her space and the way she has carved out her path. She has done some really path-breaking roles on her own terms and in given the industry a new direction, since, she started doing these women-centric roles." "I got to know her in Bobby Jasoos and can say that she is equally good a person as she is a performer. She is like a complete woman for me," she added.

Goenka also mentioned that she admires both Deepika and Priyanka, besides Vidya Balan, for the kind of work they have done and the way they have charted out their journey. She also mentioned how she admires the way in which the two have managed to strike the right balance by giving some great performances while doing realistic as well as Bollywood commercial films, displaying how versatile they are.

In fact, while talking about versatility and diverse roles, Goenka mentioned that she would like to 'explore versatility' and not stick to one genre of films. "As an actor, I want to try out every other possible role out there. Am equally excited about rom-coms, playing the quintessential Bollywood heroin, as a performer I want to experience all of it."

Besides Padmaavat, Anupriya Goenka will be next seen in Nagesh Kukunoor's next titled Maya as well as a few web-series.