The 63rd Grammy Awards ended with Beyoncé making history with most wins as she took home her 28th award during the night. Megan Thee Stallion and Cardi B's performance on WAP became the highlight.

Trevor Noah opened the pandemic-altered 63rd annual Grammy Awards on an outdoor stage in front of a sparse crowd outside the Los Angeles Convention Center, with the Grammy’s usual home, the Staples Center, as a backdrop. Noah walked inside the Convention Center during his presentation, where the show’s performances, many of them pre-recorded, were broadcast from. Rapper Megan Thee Stallion was named best new artist at the Grammy Awards on Sunday in a ceremony aimed at putting the coronavirus pandemic, which crushed live music, in the past.

Ringo Starr announced the Record of the Year award. The Grammy went to Billie Eilish. She beat the likes of Dua Lipa, Beyonce, Post Malone, Megan Thee Stallion among others. She said Megan deserved the Grammy for Best Record. "I root for you," she added.

09:04 (IST)
Beyonce Becomes the Most Awarded Singer in Grammys History with 28 Wins The Grammys are drunk in love with Beyoncé: The singer tied and then broke Alison Krauss’ record for most wins by a female artist.

BTS give an electrifying performance on Dynamite. Their performance was recorded in South Korea as they could not be in LA personally due to Covid.

In an AV, Billie Eilish looks back at her 2020 Grammys sweep. She thanks her brother Finneas for writing with her.

Taylor Swift gives shout out to collaborator and boyfriend Joe Alwyn after Folklore wins Best Album. "I wanna thank Joe, the first person I play every single song that I write. I had the best time writing songs with you in quarantine," she said from the stage.

Album of the Year goes to Taylor Swift for Folklore. She beat out the likes of Coldplay, Dua Lipa, Post Malone, Black Pumas among others for the win.

Doja Cat gave a terrific performance during the Grammys. She performed on Say So.

Grammy for Best R&B performance goes to Beyoncé for Black Parade. She is now the performer/singer with most Grammys. Her total stands at 28.

Lil Baby has performed at the Grammys. Next up are BTS and Roddy Ricch.

Fans of BTS are upset that the K-pop group did not win in the Best pop duo/group performance category. They trended #Scammys on social media. BTS lost to Lady Gaga and Ariana Grande who won for Rain on Me.

Beyoncé and Megan Thee Stallion accepted the award for Best Rap Song. Beyoncé's Grammy total now stands at 27, right alongside Alison Krauss. She could create history during the evening with one more win.

Grammy for the Best Rap Song goes to Megan Thee Stallion for Savage. Its her 2nd Grammy of the night after she took home the Best New Artist. 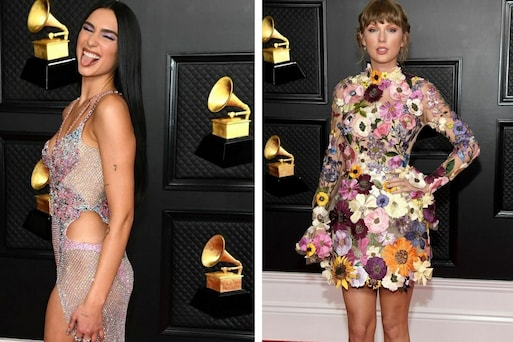 Among those that attended the red carpet were Dua Lipa, Bruno Mars, Miranda Lambert, Megan Thee Stallion, already a winner in the Premiere ceremony, Noah Cyrus, and Phoebe Bridgers.

Cardi B and Megan Thee Stallion performed WAP. Host Trevor Noah announces BTS and Lil Baby's performances are up next.

Rapper Megan Thee Stallion went all out performing Savage. She danced and owned the floor with her group. She also won a Grammy earlier in the night for Best New Artist.

An AV on Megan Thee Stallion, who won a Grammy earlier in the night, revealed her journey. "I have always been uplifted and it is easier for me to do the same. Everywhere I could perform, I was performing and it kept getting bigger," she said.

I Can't Breathe won Song of The Year Grammy. Singer-songwriter H.E.R. appeared on stage and was bestowed with the gram phone-shaped trophy.

Host Trevor Noah announces BTS, Megan Thee Stallion, Cardi B and others are set to perform at the Grammys. He will also announce the Song of The Year award.

Mickey Guyton performed Black Like Me. She is also the first woman of colour to be nominated in the Country Music category.

BTS did not win for best pop duo/group performance at the 2021 Grammys. The award was given away at the pre-ceremony. The group was nominated this year for Dynamite, their first song to be released completely in English, making them the first K-pop group to snag a Grammy nomination. Rain on Me by Lady Gaga and Ariana Grande won the category.

Taylor Swift performed on her new tracks Cardigan and Willow. She even played the guitar for a brief time.

We're all the #Swifties tonight!? #GRAMMYs

Taylor Swift performs on Willow as she swayed around while singing.

Taylor Swift performed on her Folklore track Cardigan. She wore a shimmery blue gown and performed against a hill-like setting.

Best Country Album goes to Miranda Lambert for Wildcard. She was thankful to the Grammys to somehow come together during the pandemic.