Half Girlfriend Movie Review: Shraddha, Arjun Are As Irritating As Chetan Bhagat's Idea of Romance

A still from Half Girlfriend.

Rhetorically speaking, if the film was a girlfriend, she doesn’t deserve a boyfriend.

An unimpressive adaptation of Chetan Bhagat’s ‘literature’ featuring two extremes as lead, and looped in together with a terrible recreation of a wonderful song, is what describes Mohit Suri’s Half Girlfriend the best. Rhetorically speaking, if the film was a girlfriend, she doesn’t deserve a boyfriend. And even if she found one, she must have lost it a bit too soon.

Based on Bhagat’s novel of the same name, Half Girlfriend doesn’t have a lot of surprises in store. For the most part, the film turns out to be a loyal adaptation of the writer’s imagination. The man of the masses might have had a genius stroke of luck when most of his previous adaptations – 3 Idiots, Two States, Kai Po Che and Hello – worked well at box office. Alas, every Bhagat novel needn’t be turned into a celluloid fantasy and that’s exactly what this film proves.

Madhav Jha (Arjun Kapoor), a Bihar-resident comes to Delhi and interviews for one of the most prestigious institutions modelled on St Stephen's, but soon realises that it’ll be tough for him to survive without a knack for English language. No, this doesn’t, at all, mean that he starts working on the language. Instead, he spots a fancy-looking girl Riya Somani (Shraddha Kapoor) and falls in love with her instantly. They start bonding over their shared interest – basketball and soon, he asks her out. After challenging him to score a basket, she agrees, but makes it clear that it’s not a date and they’re just hanging out. Gradually, the two get close but decide not to label their relationship. Close enough Riya makes him meet her parents, close enough to take him to her place of solitude but not close enough to be his full-girlfriend and hence, coins a new term ‘half-girlfriend’. Riya dreams to be a singer at a Jazz bar in New York while a romantic Madhav just wishes for a beautiful girl to sing a song for him. The film, then, follows the journey of the two as a gullible, amicable Madhav finds himself unabashedly in love with a rich daughter of elitist parents who doesn’t want to commit fully. How a desperate Madhav, irked by his roommates, forces himself on Riya, how they end up away from each other and how they keep finding their way back into love – form the crux of this film. Anyone well acquainted with Bhagat’s idea of literature knows what the film has in store for them and the ones who aren’t, we aren’t divulging the plot details any further.

Now, here’s an actor, who if left uncontrolled, goes berserk and over expresses himself and what more, he’s teamed up with a female protagonist who hardly emotes. While Arjun seems to be a misfit for the ‘quintessential’ Bihari boy, Shraddha is an absolute weak personification of an English-speaking and an English-singing girl with an extravagant lifestyle. Even if you want to feel and fall for Arjun’s ‘aww-inducing’ lines, the accent pulls you back. Arjun tries to keep his accent throughout while Shraddha tries to speak English throughout – and both fail miserably.

For a love story as complicated, one’d expect a chemistry as strong, but no. Don’t. You won’t feel a thing – neither the romance nor their confusion. The two hardly ever appear to be on the same page except for one or two scenes. 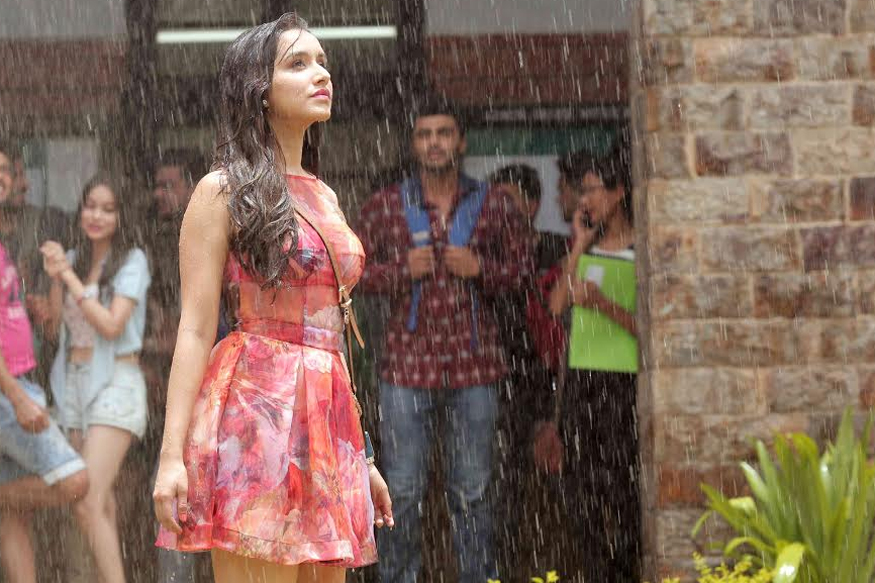 The only performance that’s worth mentioning is that of Vikrant Massey. He’s probably the only actor who justifies his character of Madhav’s saviour roommate. Also, his Bihari accent, even if not perfect, is a relief from Arjun’s constant forced blabbering.

Riya's rendition of the soulful track 'Tu thodi Der Hor Thehr Ja' is another thing so off-track that it'll start hounding you towards the end.

Plus, what’s Bollywood’s obsession with ruining the Bihari accent? Just because it’s Bihar, they called Bill Gates Bill Gate-sva. And don’t even get us started with the entire Bill Gates sequence. The least they could have done was to get a realistic impersonation of Gates. Guess they were too busy with wronging the otherwise right things.

We aren’t sure if you’d even half-like Half Girlfriend. While some of you may still find it a tad bit relatable, considering the generation’s obsession with the too-confuse-to-label-a-relationship idea, others may walk out all cringed. Watch this only if you’re a die-hard Chetan Bhagat fan and if you aren’t, please don’t waste your time.