As Rajkummar Rao turns 35th, take a look at his most promising work.

Rajkummar Rao is probably one of the most talented and versatile actors of his generation, in Bollywood. Despite unconventional looks and a guy next door personality, he has made it big in Bollywood. It has been over 8 years since Rajkummar entered the film fraternity and proved his mettle as a seasoned actor with each of his projects.

As the actor turns 35, we bring you a list of his most remarkable films:

Directed by Dibakar Banerjee, the film was the first Indian film to be presented in the found footage style. Based on the concept of Indian media and voyeurism, Rajkummar was seen playing the role of Adarsh a greedy common boy, who uses sex to gain money in order to pay his debts. The film was itself an experimental film and Rajkummar Rao chose such a unique film for his debut, showing his confidence in his talent.

After a modern age drama, Rao opted for a period war film Chittagong based on the Chitaagong uprising during British time. Directed by Bedabrata Pain, Rajkummar was seen playing the character of freedom fighter, Lokenath Bal. His role was small yet significant and he did a brilliant job at it. After the critically acclaimed film, his first major commercial success came in with Abhishek Kapoor's Kai Po Che. The film was based on Chetan Bhagat's novel 3 Mistakes of my Life and Rajkummar gave a stellar performance as Govind Patel, a geek who's motive is to expand their little sports business into a big one. His performance was very well received by the critics and audience alike. The film that actually brought the limelight to Rajkumar's footsteps was Hansal Mehta's Shahid. Based on the life of lawyer and human rights activist Shahid Azmi, who was assassinated in 2010 in Mumbai, Rajkumar played the title role. His extremely measured acting and subtle intensity won him the National Award for Best Actor and 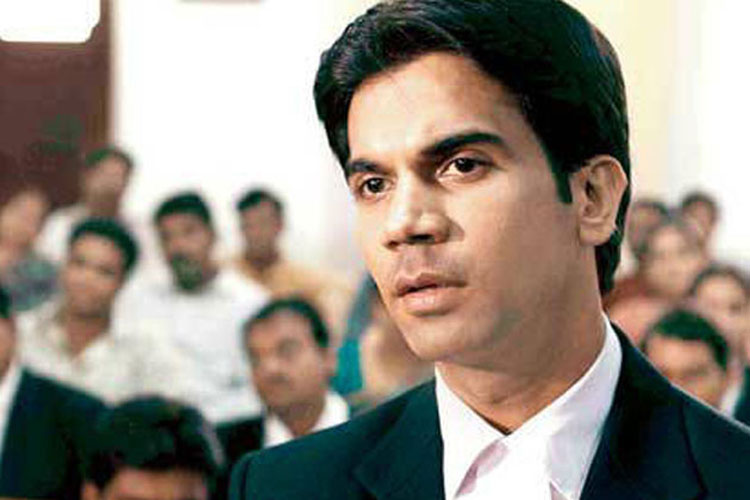 After playing intense characters, Rao went on to play a conservative city slicker in Queen, opposite Kangana Ranaut. While the film was all about Rani and her liberation, Rajkummar's Vijay held his own ground and gave a memorable performance in just a few scenes. Not all have the capabilities to live every character in the way Rajkumar does it. Rao reunited with his 'Shahid' director Hansal Mehta for 'Citylights'. He played the role of Deepak, a family man who's forced into unfavorable circumstances due to poverty and debt. Rao's performance was highly appreciated by the critics as well as the fellow actors. Shah Rukh Khan even went ahead to say he sees Rajkummar as one of the finest actors of this time and Rao will be a much better star than him in coming years. A film with just one character trapped inside a flat is a difficult story to narrate. There are no dialogues and there is limited space in which the actor is confined. The film, thus, rests on Rajkummar’s able shoulders and he does not disappoint. Rao’s persona is such that he looks like a regular guy, someone you would not look twice at if you bumped into him on the street. Yet, this regular guy emerges the strongest when pushed to the wall. Rao’s performance makes you uneasy, helpless about Shaurya, his performance makes you smile when the rains come in, his performance makes you chuckle at his conversation with a rat, his sole companion in the flat. How often does it happen that a second lead lifts up the entire predictable plot and turns it into one of the best entertainers of the year? Ashwini Iyer's Bareilly Ki Barfi proves once again proves why Rao the most underrated actor on the block. His transformation from a meek Pritam Vidrohi to the catalyst that makes Chirag mend his ways is impeccable. The way he keeps his friends in high regard despite being bullied by him shows how gullible, naïve and innocent he is. Moments when Pritam faces difficult to speak clearly, it's his eyes that never lose the tenderness while the entire body language makes you laugh. With Newton Rajkummar Rao's work echoed that the actor is here to stay not because of his name, but because of the quality work that he brings to the screen. The comedy drama was not only applauded in India but internationally too. Winning Best Film and Filmfare Award for Best Story, Rao also won the Asia Pacific Screen Award for Best Actor, and the film was selected as the Indian entry for the Best Foreign Language Film at the 90th Academy Awards. Directed by Hansal Mehta, Rajkummar is seen in the role of Ahmed Omar Saeed Sheikh, British terrorist of Pakistani descent in Omerta. This biographical crime drama film showcased the 1994 kidnappings of Westerners in India for which Omar was arrested and served time in prison and the film deals with the intriguing plotting of murder of Wall Street Journal reporter Daniel Pearl in 2002. We wish the talented star a very Happy birthday!