Happy Phirr Bhag Jayegi, the sequel to 2016 hit Happy Bhag Jayegi, is all set to release in theatres on August 24 this year.

When Happy Bhag Jayegi released in 2016, nobody expected it to be a hit. The film drew immense praise for its fresh story and funny screenplay. Jimmy Shergill, Abhay Deol and Diana Penty equally contributed to the film by delivering terrific performances. Once again, the team is all set to tickle your funny bones. While Jimmy, Diana, Abhay, Ali Fazal and Piyush Mishra are reprising their roles, Sonakshi Sinha and Punjabi actor-singer Jassie Gill have joined them in the sequel.

The makers have shared the first trailer for the new film and it looks damn funny. The nearly three-minute long trailer begins with a lot of confusion as Sonakshi Sinha’s Happy shouts at a Chinese goon who has brought her to China thinking she is the original Happy, played by Diana in the first part. Meanwhile, Jimmy Shergill’s wedding gets called off as he has also been abducted by the same gang. Things get even more confusing when Jimmy (Daman Singh Bagga) meets Sonakshi’s Happy. Diana makes a brief appearance with Ali in the trailer. Piyush Mishra is bang on with his Urdu dialogues. The funniest scene of the trailer is when Jimmy pronounces lesbian as “labrador”.

We don’t know if it will be as good as the original but its trailer has definitely impressed us. Watch it here:

Directed by Mudassar Aziz, Happy Phirr Bhag Jayegi is scheduled to release in theatres on August 24 this year.

Here are a few stills from the trailer: Sonakshi Sinha in a still from the trailer Jimmy Shergill in a still from the trailer 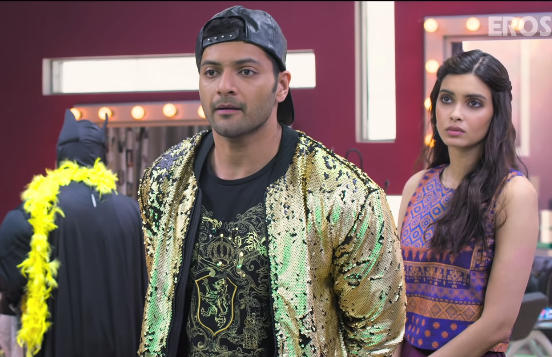 Ali Fazal and Diana Penty in a still from the trailer