Sophie Turner, who was nominated in the Outstanding Supporting Actress in a Drama Series category at the 71st Primetime Emmy Awards, for her role of Sansa in Game of Thrones received a special wish from her sister-in-law Priyanka Chopra.

Game of Thrones fame actress Sophie Turner, who was nominated in the Outstanding Supporting Actress in a Drama Series category at the 71st Primetime Emmy Awards, received a special wish from her sister-in-law Priyanka Chopra Jonas before the gala night.

Apart from Priyanka, Sophie's husband Joe Jonas shared a heartfelt message for his wife. He wrote: "I am so proud of you. You are nominated for an Emmy! You are incredible. I love you." Priyanka's husband and singer Nick Jonas too congratulated Sophie.

"8 seasons of brilliant work. Congrats on your Emmy nomination," Nick wrote. Though Sophie did not win the award, her show "Game of Thrones" was named as the Best Drama Series. 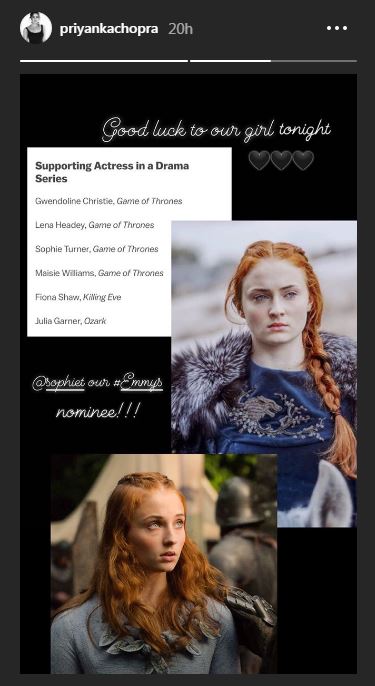 Meanwhile, the final season "Game of Thrones", which broke records by earning 32 nominations, took home 12 trophies, including Best Drama series and Best Supporting Actor for Peter Dinklage for the role of Tyrion Lannister.

Apart from the glitz and glamour, the ceremony was full of powerful moments with actress Patricia Arquette demanding for equal rights for transgender people while accepting the award in Supporting Actress in a Limited Series or Movie category, and Michelle Williams making a passionate plea for pay equality.