Shruti Haasan shared several pictures of Santanu Hazarika on his birthday with loving messages for him.

It is the birthday of Shruti Haasan’s boyfriend Santanu Hazarika and the actress posted the most fun-filled wish for her beau. Shruti took to Instagram and shared a collage of their pictures where the couple can be seen enjoying and making funny faces. The Gabbar actress called Santanu her ‘favorite human’ and wished him a very happy birthday. Santanu and Shruti have been dating for some time now. The two often share pictures with each other on their Instagram.On Santanu’s birthday, Shruti shared several pictures and videos. Calling him ‘birthday boy,’ Shruti shared another solo picture of Santanu where he is looking rather serious. Showering him with affection, Shruti also thanked Santanu for being born, in another Instagram story where she shared her boyfriend’s picture. The 35-year-old actress also shared short videos of Santanu celebrating his birthday. 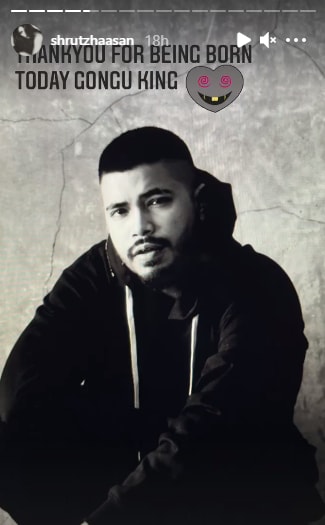 In an interview with Pinkvilla, Santanu opened up about his bond with Shruti and said, “I would just say that I really don’t discuss my relationships. I like to keep things personal, and prefer to talk about my art and work." However, he added about sharing avery passionate relationship with Shruti when it comes to art, music and culture.

Calling it a "beautiful friendship and bond", Shantanu added that the lovebirds havesimilar taste in music, fashion and culture.

On the professional front, Shruti was last seen in Netflix's first Telugu original anthology drama consisting of four short film segments. She will next be seen in the Tamil political thriller Laabam opposite Vijay Sethupathi. The makers are yet to officially announce its release date.

Apart from Laabam, she also has Salaar in her kitty. The action-thriller features Shruti opposite Bahubali star Prabhas. Directed by Prashanth Neel, it is slated to release on April 14, 2022.