The new year is here and everyone is in a celebratory mood. Our favourite television stars have also been welcoming the 2021 in their own way and sharing pictures on social media. Actress Hina Khan celebrated with some of her close friends from showbiz.

Photos and videos on Instagram show her at a house party with beau Rocky Jaiswal, actors Priyank Sharma, Kanchi Singh, and Rohan Mehra. All of them can be seen in their best moods as they pose for the pictures.

Hina and Priyank were co-contestants in Bigg Boss 11, and have also starred in a music video together. Rohan was her co-star in the popular show Yeh Rishta Kya Kehlata Hai. 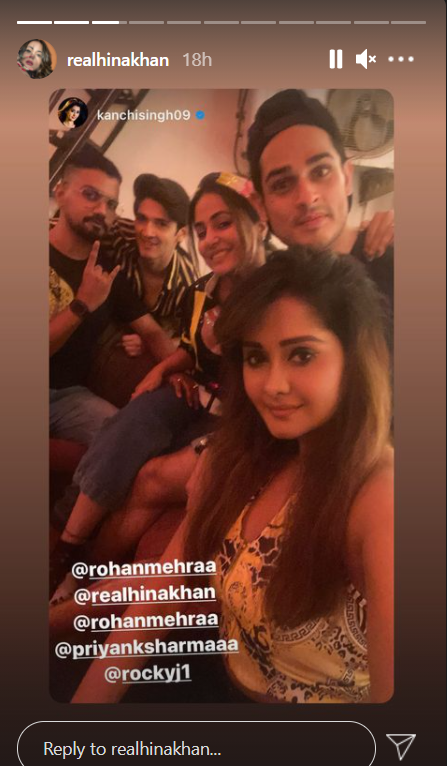 The actress was holidaying in Maldives recently and still seems to be in throwback mode. She shared some photos from the beach vacation to say that she is all ready for 2021.

Hina is currently on a career high. She entered Bigg Boss 14, the ongoing season, briefly as a Toofani Senior. Her stint in the reality show in season 11 is a huge reason for her popularity.

Before that, the actress also made a cameo appearance in the supernatural show Naagin 5. Hina has also been dabbling in movies. After starring in Vikram Bhatt's film Hacked, she produced her own movie Wishlist in 2020. She had also appeared at Cannes in 2019 for her film Lines, which will release this year.