Ajay Devgn and Saif Ali Khan in the official poster of Tanhaji.

With so much praise heaped upon the incredible visual elements of Tanhaji, we spoke to film's visual effects supervisor, Prasad Sutar, to know about how some of the film's most memorable scenes were created.

With its remarkable virtual production techniques, Om Raut's Tanhaji: The Unsung Warrior has broken the wall between director and viewer, both figuratively and literally. The film, starring Ajay Devgn and Saif Ali Khan, is a feast of visual effects that stunningly brings to life valour, courage and bravery of the Marathas.

The meticulously crafted historical period drama has been busy demolishing box office records ever since it arrived in cinemas on January 10. And without a doubt, a big part of the film's success has come from its flawlessly executed VFX, as well as its willingness to portray every visual element with as much realism as cinema technology could bring together.

The four-year process that Tanhaji took to hit theatres involved plenty of typical filmmaking challenges, but also the process of pre-visualising the entire film, shot for shot, long in advance of bringing Ajay Devgn and Saif Ali Khan on set.

To do that, Raut enlisted the help of Prasad Sutar, who led the work of the VFX team behind Tanhaji at Devgn's visual effects company NY VFXWAALA.

"When we started thinking about this project, the only option was to do it the way we shot it. Otherwise the film wouldn't have happened the way Om and I looked at it," says Sutar in an exclusive chat with News18.com. "The scale and the visuals which we wanted to present in the whole film, it wouldn't have been possible for us to go on a real location and build those kinds of sets so we adopted the graphic novel approach."

Sutar, who has previously been the VFX supervisor on projects such as Jagga Jasoos, Bajirao Mastani, Shivaay and Padmaavat, says when he and Raut saw the final product a week before the official release they knew that they had made a good bet. "It was a thing which could have fallen either ways because nobody had seen these kinds of visuals in any Hindi movie before. What I had thought of achieving, I'd say I'm at 90 per cent there. But there is always space for improvement. I think Om was more confident than I was. When the first print came out a week before, he said, 'We will sail through.'"

Tanhaji has minted Rs 245 crore in 23 days by getting the largest 3D boost ever for any original Hindi movie, thanks to Sutar and his team that worked diligently to help Raut accomplish this feat.

Considering it was Devgn's most ambitious project and the most part of the film rested upon the quality of the visual effects, the pressure to deliver on Sutar had been immense.

"The pressure mounted specifically after the trailer came out because suddenly everybody was expecting the whole film to look as spectacular as the trailer," he says, before adding, "But then you tend to do better when you're in pressure." Sutar says he was able to put a movie this size together and made sure everything looked real and spectacular because he, Raut and Tanhaji's screenwriter Prakash Kapadia knew what they were going to showcase eventually.

"I always say that in this genre, either you go the Gladiator way or the 300 way. Those are the two benchmark films in my head. So, we were very clear that we were not going the Gladiator way because we couldn't afford that as it would have required bigger sets and outdoor locations to shoot. As soon as we figured that, the whole planning started among Om, the art direction team and me about set designing, conceptualising the main frames of the film. Also, Om was very clear about what he wanted eventually. We had spent two years before we started shooting the film. So, we knew where we were heading much before we started shooting the film."

"We were very clear that we'd go with a little graphic novel look so that it looks surreal. Because if you try to go real then you have to do a whole lot of work. So, the idea was to visually support the story. I think that planning helped."

The film is mainly divided into three parts from the VFX perspective. One is the set extension part, where Sutar and the team re-created the entire environment around the characters. The second was the effects part that depicted stylised fire and realistic water. And the final one was the animal section, which Sutar said was "the toughest part of all."

"We took a very conscious approach that there weren't going to be any real animals at all. So, it was all CGI. It was also done to maintain the consistency throughout the entirety of the movie so that there's no disconnect with the audience."

Sutar further reveals that he was adamant about not taking the typical sword-and-sandal path for Tanhaji. Instead, he wanted to use the technology to push artistic boundaries.

"Unlike other historical dramas, the advantage in this film was that the battles were not fought on an open ground. Those cliched shots of two armies colliding were not there. That was the very good starting point for me at least. We took a whole lot of time to design the action in this movie. The entire battle was done in a small chunk of 10 people fighting at a time. I think that was the uniqueness of this action. There's a consistent craft to the whole action. We had a German team that was taking care of the action. They were rigorously studying what different we could bring in. And since we were shooting in a controlled space because of the VFX, we were actually able to choreograph a lot of things correctly."

Sutar believes that they were successful in creating the best possible visual effects for Tanhaji, because other than making the film visually exciting, they took care of its visual accuracy by obeying the laws of physics. 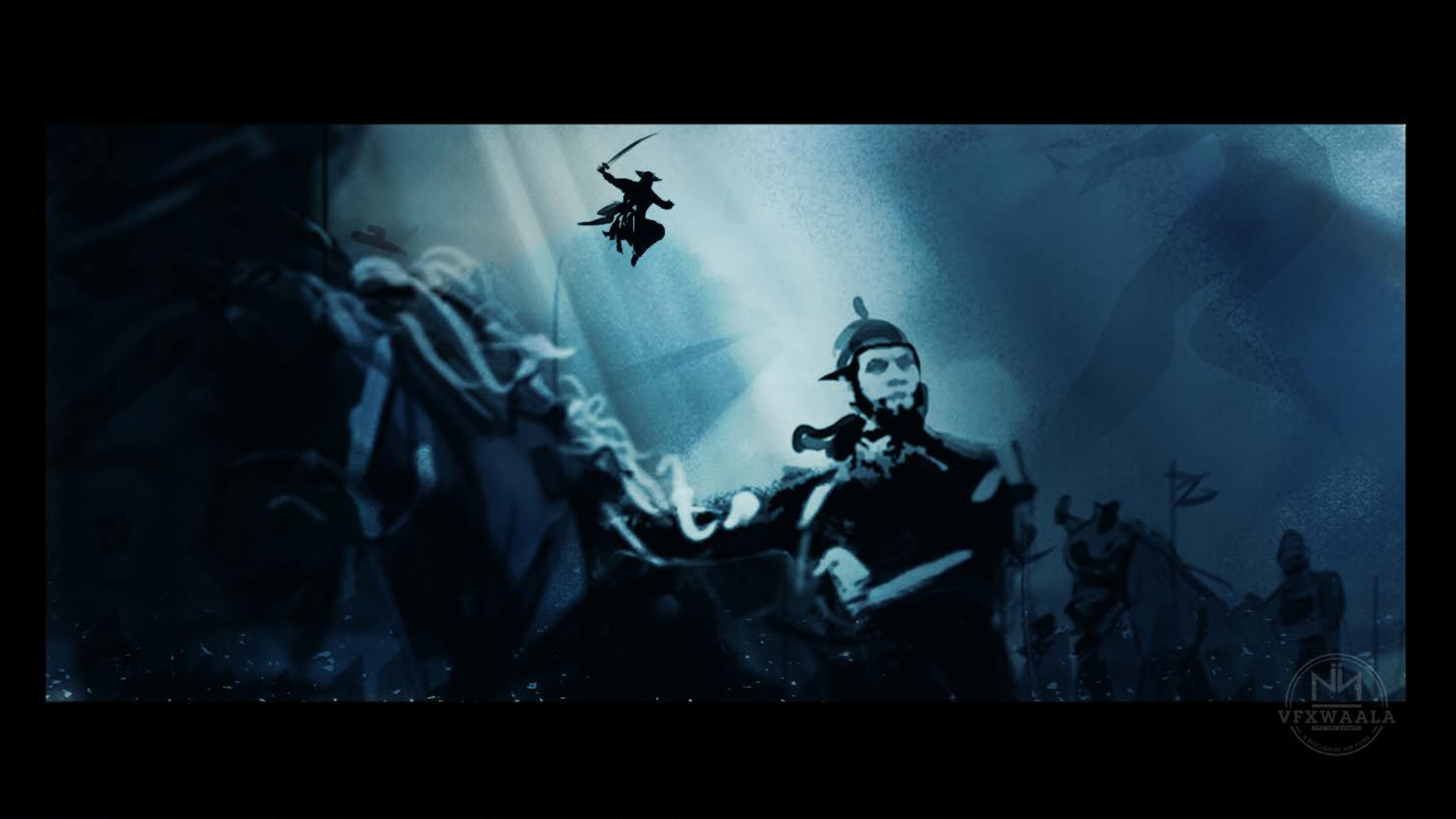 "We were always clear that we wouldn't do anything that had gone against physics. For me, your rendering might not look correct or lighting might not be correct, that is all fine but physics should not go wrong. So, we stuck to the basic physics -- get the gravity and flight correct. Om was also clear about that we wouldn't go overboard with the action part and try to keep it real.

"Even when Ajay sir lands in the opening scene of the film, he doesn't land on two legs. He hits the knee on the ground. So, we have kept that kind of realism. He doesn't land like a superhero. The best part was Ajay sir agreeing to our vision," he adds.

Lastly, Sutar reveals that one particular scene was one of the most challenging aspects of the film for which he and his team had to concentrate for months. In the act, we see a group of Maratha guerrilla warriors, along with Devgn's Tanhaji Malusare, ready to take on Udaybhan Rathod's army amid rough hill terrains.

"We kept planning Ajay sir's entry scene, wherein he flies with the rope and comes down, for quite a while. We had versions of it. We locked it almost six-seven months before we started shooting it. So, we knew that was it. But the execution was tough for us in terms of how we should shoot the flight. We shot it a lot of times but we didn't like it because the physics was not working. Those were the things we kind of struggled in that space. So that particular sequence was always the issue with us. We were trying to make it better till the end," Sutar concludes.

(All images from NY VFXWAALA)