Ileana D'cruz has deleted her pictures with Andrew Kneebone amidst rumours of their split.

Actor Ileana D'cruz, who had been in a long-time relationship with Australian photographer Andrew Kneebone, is said to have broken up with her partner.

The Barfi actress has never spoken up about the nature of their relationship but has referred to him as her 'husband' in her Instagram posts. Recently, it came to light that there might be trouble in paradise when they unfollowed each other on social media. She also deleted her pictures with the photographer on Instagram.

Amidst rumours of a split, Ileana shared a couple of cryptic notes on her Insta story. The notes which are motivational in nature, make us think whether Ileana is trying to amp herself to stay positive during the time of distress. The post by the page Good Quotes, read, "In life you’re going to lose friends, family & partners, but no matter who walks out of your life, never lose yourself. The most important things to learn how to do is to love yourself when u feel unloved by those around u & be there for yourself when you feel like u have no one.” To this, she wrote a simple "Yes."

The other post was an altercation between the mind, heart, and soul which she "stole" from Athiya Shetty.

Check out the posts below: 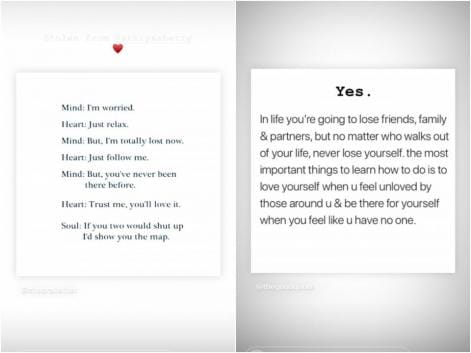 In a recent interview with Hindustan Times, Ileana had opened up about her relationship with Andrew and why she prefers to keep it private. “Initially, I was told to not speak about my relationship. And while I don’t have an issue talking about it, it’s unfair that people are being unnecessarily harsh to him (Andrew). It is unfair to subject him to harsh comments just because I am a celebrity. He is entitled to his privacy and respect and he deserves both in equal measure. He is a great person, and it did affect me when people left harsh comments on my social media posts. But I do give it back to nasty trolls.”

On the work front, Ileana will be next seen in Pagalpanti, also starring John Abraham, Arshad Warsi, and Anil Kapoor. The film is slated to release on  December 6, 2019.