Ileana D'Cruz is currently vacationing in the Andaman Islands. She gave a glimpse of her exotic holiday as she shared some pictures on her social media handle.

Bollywood actor Ileana D’Cruz, who was last seen in Anees Bazmee‘s directorial Pagalpanti, is setting Instagram on fire with scintillating pictures of her.

Clad in a black bikini, the Barfi actress is currently holidaying in Andaman Islands. In the pictures shared by the gorgeous diva, we see some sinful nosh adoring her breakfast table. Apart from that, Ileana posted some pictures from the scenic locale and herself lounging by the beach.

In one of the images, the avid social media darling is seen making most of her leisure as she relaxes on a rope swing.

Check out Ileana’s stunning holiday pictures that are sure to set the gram ablaze. 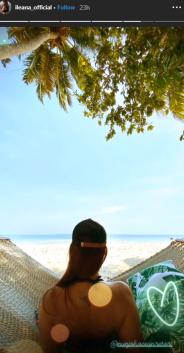 Last year in August, the Raid actress hit headlines after reports emerged of her breakup with long-time boyfriend Andrew Kneebone. During an interview with The Times of India in November 2019, Illeana revealed that she had to seek a therapist's aid following her split.

"I think you owe it to yourself to take care of yourself, and the minute I realised that I saw a huge difference; not just mentally, but physically and internally as well," she was quoted as saying.

The Rustom actress was last seen in Anees Bazmee‘s directorial Pagalpanti, which was a multi-starrer action comedy released in November 2019.

Apart from that, she has signed Abhishek Bachchan-starrer crime-drama The Big Bull, helmed by Kookie Gulati. The film is scheduled to hit the theatres on October 23.