Rashami Desai's 'Naagin 4' journey has come to a bittersweet end. Take a look at some on set pictures from her last day of shoot.

Rashami Desai wrapped her portion of the shooting on Naagin 4 on Tuesday evening. With this, Rashami has bid adieu to the supernatural-drama show, produced by Ekta Kapoor.

After a successful Bigg Boss 13 stint, Rashami was roped in to play Shalaka on the daily soap, but her journey was cut short when it was announced by Ekta in May that a new season of Naagin is in the works after the story line of the current season did not impress the audience.

Meanwhile, Rashami got emotional on the last day of her shoot on Naagin 4. She clicked farewell pictures with actresses Adaa Khan, Nia Sharma and Surbhi Jyoti to commemorate the special occasion. After giving her last shot, she even gave a speech on the sets and thanked the director for the experience.

Later, Rashami also shot some videos from inside her vanity as she headed home from shoot. Take a look at some last day pictures of Rashami with other Naagin 4 cast members. 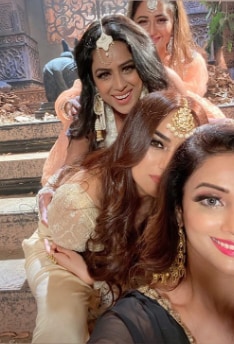 Rashami's co-actor Vijayendra Kumeria also posted a picture with the actress on social media and wrote, "For whatever short time we worked together, it was a lovely experience. Lots of love and luck to you."

It has also been announced that Hina Khan, Mohit Malhotra and Dheeraj Dhoopar will play lead roles in Naagin 5. As the fourth edition comes to an end in mid-August, new season's episodes will air soon afterwards. It has also been reported that Naagin 5 is all set to go on the floors in a few days.