In Pics: Sophie Turner Relives Pregnancy Days as 2020 Wraps up

Sophie Turner shared some throwback pictures from the time she was pregnant with Willa Jonas.

Actress Sophie Turner welcomed her daughter Willa with husband Joe Jonas earlier this year in July. They got married in Las Vegas in May 2019, and had a second, bigger ceremony in France later that year. Their pregnancy was revealed in February 2020 and now the family of three are settling into their new lives.

Meanwhile, as 2020 wrapped up, Sophie shared some unseen moments from her pregnancy days, as she relived the days in the lead up to the birth of her baby daughter. In several pics, she can be seen flaunting her bare baby bump. These pictures are truly heartwarming. One of the pictures is from July, after she had delivered Willa. 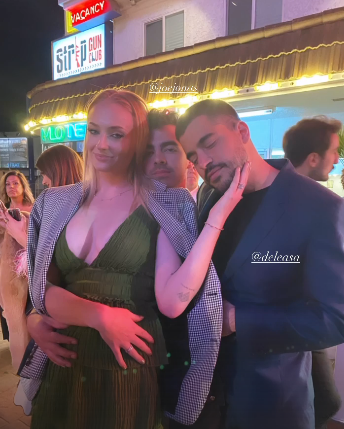 On the work front, Sophie will be lending her voice for the character of Princess Charlotte in upcoming animated series, The Prince. She officially joined the cast of animated series in November. It is created and executive produced by Family Guy producer, writer and actor Gary Janetti.

The satire focuses on seven-year-old Prince George, who is voiced by Gary, and his antics as the first-born child of Prince William and Kate Middleton, Duchess of Cambridge. Sophie will voice George's sister. "The Prince is being made for HBO Max.