Salman Khan holds the tricolour to extend wishes on the Independence Day.

Today, India is celebrating its 75 years of Independence, with utmost pride and glory. Several film celebrities including Salman Khan, Kamal Haasan, Sara Ali Khan, and R Madhavan among others extended warm wishes to their fans on the occasion.

Salman took to Instagram to share a picture of him holding the national flag in his hand. Salman wore a white shirt, paired with black trousers and a black cap. Sharing the post, Salman wrote, “Wishing everyone a very happy 75th Independence Day… Jai Hind.” 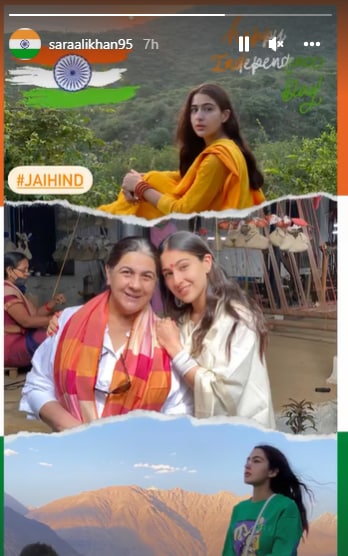 Meanwhile, expressing his heartfelt wishes for Independence day to every Indian celebrating the occasion, actor and politician Kamal Haasan on Sunday warned that history has taught us that forgetting lessons from the past could take us back to old days. The actor took to Twitter to share a post in Tamil, in which he said: “My hearty wishes to every Indian who is celebrating the 75th Independence Day of India.”

Pointing out that our history has told us that several brave freedom fighters had given up their lives, their livelihoods, wealth and comforts and had struggled for long to win our Independence, Kamal said: “If you forget history, you will have to return to the very same old days says history,” and urged people to take a vow not to forget history.

Earlier, Shah Rukh Khan shared a video in which his sons Aryan and AbRam can be seen hoisting the national flag. He captioned the post, “Teaching the young ones at home the essence and sacrifice of our Freedom Fighters for our country India, will still take a few more sittings. But getting the flag hoisted by the little one made us all FEEL the pride, love and happiness instantly.”