Actress Neetu Kapoor will be seen taking over the 'Indian Idol 12' stage in the upcoming weekend episodes. He even shook a leg with show host Aditya Narayan.

Popular singing reality show Indian Idol season 12 will be airing a special episode soon for all the lovers of late actor Rishi Kapoor. The show’s upcoming episode will see Neetu Kapoor grace the stage. This weekend, the show will pay tribute to Rishi Kapoor in an episode dedicated to him. His wife, Neetu shot for the special feature on March 22. The top 10 contestants on the show will celebrate the legacy of the first chocolate boy of Indian cinema by singing several hit numbers featuring him. Neetu will be seen on a reality show after a long haul to be a part of the nostalgic episode.

As per a report in Times of India, The 62-year-old will be seen taking over the stage to shake a leg with show host Aditya Narayan. She will also give a standing ovation to the participants. The judges – Vishal Dadlani, Neha Kakkar, Himesh Reshammiya along with the contestants will be seen having a gala time with Neetu.

The veteran actress took to her social media handle to share an update. She shared a picture on her Instagram stories wherein she can be seen posing with her team. While posting it, she wrote, “Thankyou all of you for today” followed by hashtag#indianidol12. 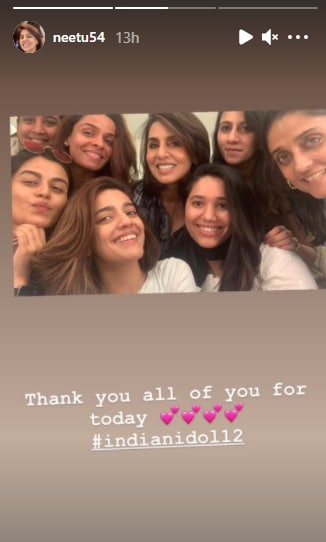 Rishi Kapoor passed away on April 30 last yearfollowing a long battle with leukaemia. Earlier this month, Neetu’s son, Ranbir Kapoor was confirmed to have tested positive for COVID-19. In his absence, she filled in to be a part of the celebrations as the football club of Mumbai co-owned by Ranbir became champions in the final of the Indian Super League 2020-21. Neetu also started shooting for her upcoming film, Jug Jugg Jeeyo in Chandigarh. However, the filming was put on hold after several members of the unit contracted coronavirus. The film also starring Varun Dhawan, Kiara Advani, Anil Kapoor, will go on floors again in April.