During Q&A session on Instagram, Aamir Khan's Daughter hinted that she would like to date Dangal star Sanya Malhotra.

Aamir Khan's daughter Ira Khan is among starkids who generate a lot of curiosity among Bollywood enthusiasts. She is quite popular on social media and her activities usually make headlines.

The 23-year-old does not shy away from creating a stir every now and then. The latest reason for her to be back in the news is a Q&A session she hosted on Instagram.

She did a session with her fans, where she asked them, "What are you doing this quarantine?" To which a fan replied, "Thinking about dating Sanya Malhotra." Ira added a dash of her humour and replied, "Get in line. @sanyamalhotra - Me first." 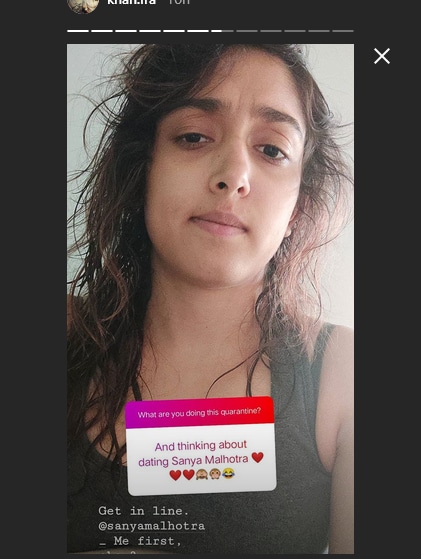 Sanya Malhotra co-starred with Aamir Khan in the 2016 sports biopic Dangal, which also marked her debut in Bollywood. The film showcased the journey of the Phogat sisters from fighting in dangals in Haryana to winning medals at the Commonwealth Games. Geeta and Babita's roles were played by Fatima Sana Shaikh and Sanya Malhotra, respectively.

Ira is the younger of Aamir Khan's two children with his first wife Reena Dutta. She made her directorial debut with a theatrical adaptation of Euripides' Medea, which featured Hazel Keech in the titular role. It premiered in different cities across India in December last year.