Tributes from Bollywood and Hollywood poured in for the industry’s most versatile actor, Irrfan Khan, who passed away in Mumbai, on Wednesday, at the age of 53 while battling a colon infection.

Prime Minister Narendra Modi and Bollywood megastar Amitabh Bachchan and Priyanka Chopra led the tributes to the industry’s most versatile actor, Irrfan Khan, who passed away in Mumbai today at the age of 53 while battling a colon infection. The actor, known for bringing gravitas to Bollywood and essaying the ordinary aam aadmi with panache, was ailing since 2018 when he was diagnosed with a neuroendocrine tumour. He was laid to rest at the Versova cemetery in the presence of his family and friends. Several celebrities including Vishal Bhardwaj, Tigmanshu Dhulia, Mika Singh and Kapil Sharma attended the last rites of the actor.

An official statement put out on behalf of the actor’s family read: “I trust, I have surrendered”; These were the some of the many words that Irrfan expressed in a heart felt note he wrote in 2018 opening up about his fight with cancer. And a man of few words and an actor of silent expressions with his deep eyes and his memorable actions on screen. It’s saddening that this day, we have to bring forward the news of him passing away.

Irrfan remained, through his three decades of cinematic life, a poet and, when Bollywood embraced him wholeheartedly, an entertainer with whom the poet was always brawling. 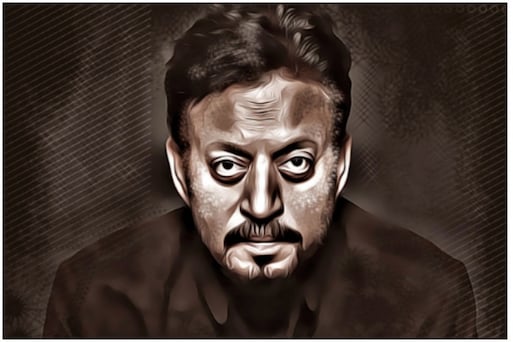 Art is longer than life - Lee Strasberg The horror, the horror...the elongated, rattling gasp of a dying Marlon Brando in Apocalypse Now encapsulates the shaken feelings of an Indian cinema lover's at the tragic passing of Irrfan Khan. 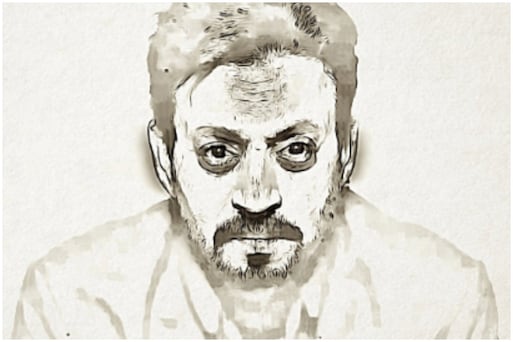 The sudden demise of actor Irrfan Khan not only jolted the Indian film industry, but sent shock waves internationally as well. In Aseem Chhabra's book, Irrfan Khan, The Man, The Dreamer, The Star, we get a rare glimpse of what pushed him towards acting, and gave India one of it's most talented actors.

Nawazuddin Siddiqui bids goodbye to Irrfan-- his mentor and co-star in many films.

In d year 2000 a film directed by #IrrfanKhan named ALVIDA starred me & I ws lucky 2 hv my mentor as my co-star in many films.
No 1 wil evr b able 2 fill his space in d entire world of cinema.
Never thot in d worst of my dreams, dat wil hv 2 say “ALVIDA” so soon RIP #IrrfanKhan National award-winning actor Irrfan Khan passed away on Wednesday (April 29) morning. He had been battling rare cancer for over two years. Irrfan was laid to rest at Versova burial ground, Mumbai at 3 pm on Wednesday.

19:08 (IST)
Singer Ila Arun, who too hails from Jaipur, said Irrfan Khan was an extraordinary man. "He was a man with a simple face and intensity in the eyes. We have all seen that he had a fighter inside him. His demise is an irreparable loss," she said.

Haidar Ali Zaidi, a friend of Irrfan Khan from schooldays, recalled how the actor idolised Mithun Chakraborty, telling him that he wanted a haircut like that of the star. The two went on to join Rajasthan University. "In university days, our departments were different but we would to sit together near the university swimming pool. Some theatre students used to perform there and seeing them, Irrfan himself plunged into theatre and later emerged as an amazing actor, which we have unfortunately lost today," Zaidi told PTI.

18:50 (IST)
When Tom Hanks Thought Irrfan Khan was the 'Coolest Guy' on the Sets of Inferno 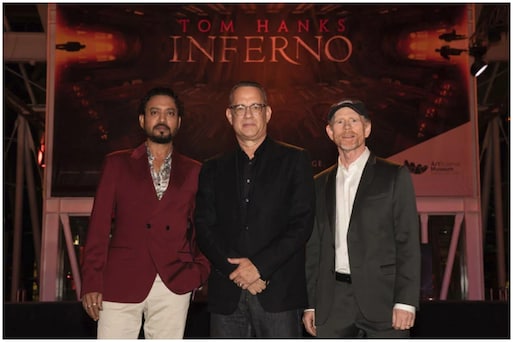 Tom Hanks was impressed with Irrfan Khan's acting skills, and had also found a way to ape his style while working with him in Inferno.

Filmmaker Vishal Bhardwaj, a frequent collaborator with the late Irrfan Khan, says the sudden demise of the actor tore him apart. "I feared that he would be gone much before his time but didn't expect that it will be so devastating and ravaging to me personally. It feels as if I am torn into two parts. A part of me has died with him," said Vishal, who worked with Irrfan in films such as 'Maqbool', '7 Khoon Maaf' and 'Haider'.

Farhan Akhtar shares a throwback picture with Irrfan Khan, writing, "Always wanted to collaborate with him but unfortunately never got the opportunity.. thank you for the wonderful memories.. be they on screen or the times we got a chance to catch up. RIP Irrfan." 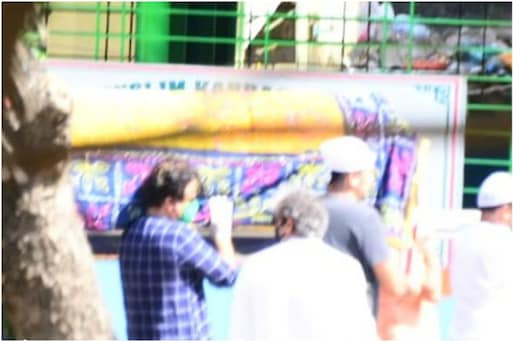 Actor Irrfan Khan passed away in Mumbai at the age of 53 while battling a colon infection. Irrfan was buried at the Versova Kabrastan in Mumbai at 03:00 pm this afternoon soon after the news of his passing away was announced.

17:29 (IST)
Can't Imagine I Am Talking About Irrfan In Past Tense, Says Nimrat Kaur Ayushmann Khurrana shares heartfelt note on Irrfan Khan's demise. Thanking the actor for the legacy he has left behind, Ayushmann shares his aspirations to have had worked with the actor.

Irrfan Khan's body carried to the burial ground in Mumbai. 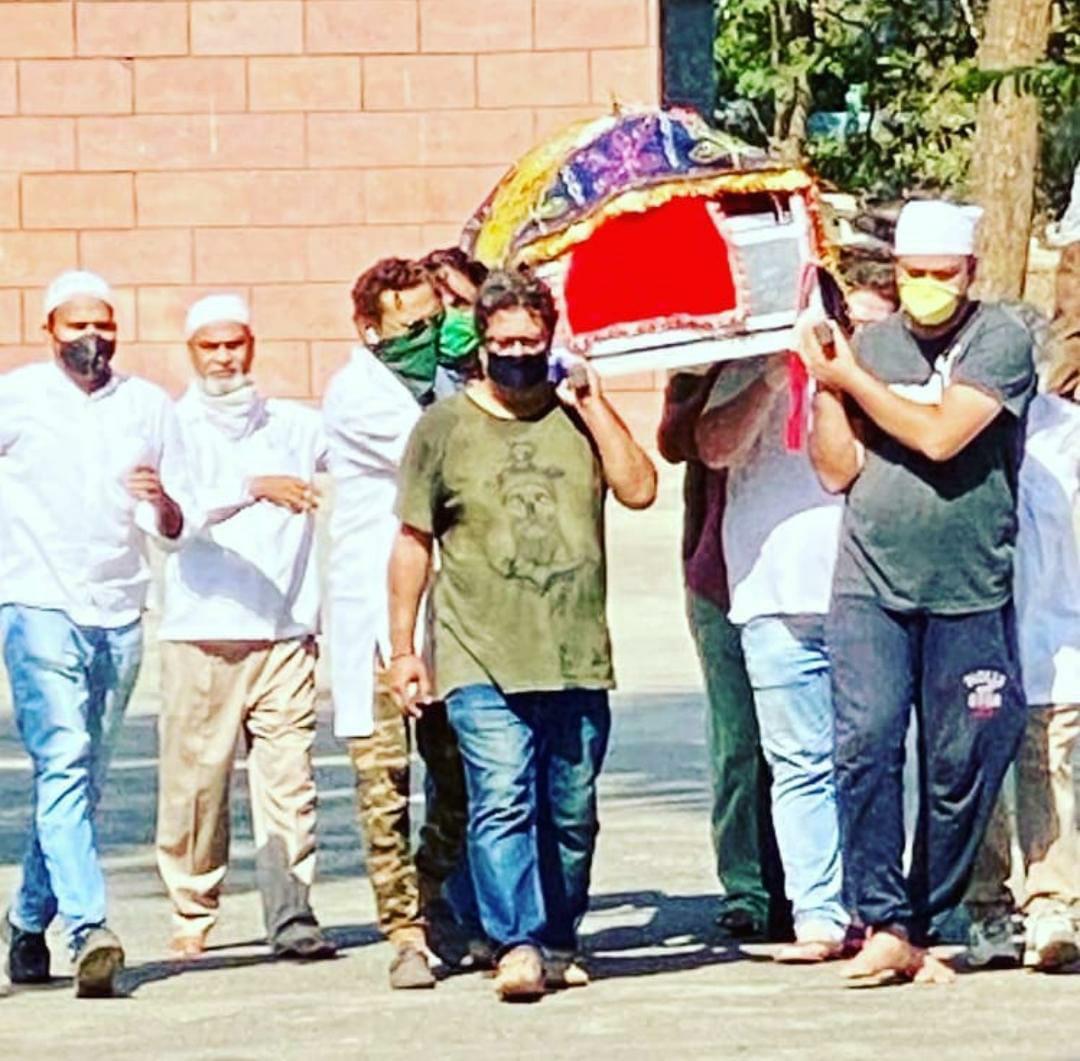 Actress Deepika Padukone shared a blank black image on Instagram to express grief at the death of Irrfan Khan.

⚡️ “Some dialogues only Irrfan Khan could have pulled off”#RIPIrrfanKhan | One Of The Most Versatile actors of Modern Bollywood Classics Passes Awayhttps://t.co/YJkVn3s6kA

After the news of Irrfan's demise surfaced, fans and well-wishers of the actor gather outside his house in Jaipur. It was Delhi's National School of Drama (NSD) that helped late veteran actor Irrfan Khan to find a footing in Indian cinema. His alma mater on Wednesday condoled the demise of Bollywood actor Irrfan Khan saying that the theatre school has lost one of its "meritorious" members.

16:20 (IST)
At National School of Drama, We Were Mesmerised By the Persona of Irrfan Khan: Vani Tripathi Tikoo Vani Tripathi Tikoo, former BJP national secretary, was a junior of Irrfan Khan at the National School of Drama (NSD) in Delhi.

16:12 (IST)
Irrfan Khan's Wife Sutapa Sikdar was His Reason to Live, Here's a Look Back at Their Love Story Bollywood actor Irrfan Khan has passed away in Mumbai on Wednesday. He died in the presence of his family-- wife Sutapa Sikdar and sons Babil and Ahan.

Irrfan Khan completed 25 years of his marriage to Sutapa in 2020. They shared the common love for cinema and art and were fellow mates at the National School of Drama in New Delhi. The two fell in love during their college days and tied the knot in Feb 1995.

15:57 (IST)
Irrfan Khan Passes Away: Here are Details of the Last Rites Calling Irrfan Khan's demise a big loss to the film industry Salman Khan said his heart goes out to the actor's family.

Big loss to the film industry, his fans, all of us n specially his family. My heart goes out to his family. May God give them strength.
Rest in peace brother u shall always be missed n be in all our hearts.. pic.twitter.com/KFQ1RoC1H8

Irrfan's journey from AC repairman to an actor

Irrfan was buried at the Versova kabrastan in Mumbai at 3pm this afternoon soon after the news of his passing away was announced. In presence were his family, close relatives and friends. Everyone paid their final respects and mourned the loss of his passing away. Wednesday marked a black day for Bollywood and film lovers all around the world with renowned actor Irrfan Khan passing away at the age of 53.

"Irrfan was a strong soul, someone who fought till the very end and always inspired everyone who came close to him. After having been struck by lightning in 2018 with the news of a rare cancer, he took life soon after as it came and he fought the many battles that came with it. Surrounded by his love, his family for whom he most cared about, he left for heaven abode, leaving behind truly a legacy of his own. We all pray and hope that he is at peace. And to resonate and part with his words he had said, “As if I was tasting life for the first time, the magical side of it.”

Tributes for the star poured in from not just the industry but also the political world. Bachchan, who shared screen space with Irrfan in Piku, called him an "incredible talent, a gracious colleague and a prolific contributor to the World of Cinema." Actor Radhika Madan, who most recently worked with him in the film Angrezi Medium, said she had no words to convey her loss.

"I dont know what to say... my heart aches when i write this. He was one the strongest people i knew, a fighter. And so are Sutapa ma'am ,Babil and Ayan. Im just grateful that our paths crossed in this lifetime. He is and will always be an inspiration to many. A legend. The man who changed the wave of the indian film industry.May his soul rest in peace."

Prime Minister Modi termed his death a loss to the world of cinema and theatre. Several chief ministers too condoled the demise.

The actor is survived by his wife Sutapa Sikdar and sons Babil and Ahan.