Is Salman Khan's Eid 2020 Release 'Locked and Loaded'? Deets Inside

Cinematographer Ayananka Bose, who was worked with Salman Khan on his Eid releases before, posted an Instagram story with a shooting scheduled of a movie which read 'Radhe' at various places. Salman's next is set to be titled Radhe: The Most Wanted Cop.

While Salman Khan may or may not have his plate full of work commitments, his Eid release is always awaited by fans. After walking out of Sanjay Leela Bhansali’s Inshallah, his supposed Eid 2020 release, speculations popped about which project will fill in the void. And according to rumours, it will be him donning a cop avatar once again for a  movie titled Radhe: India’s most Wanted Cop.

While it was earlier reported that various sources pointed at Sohail Khan getting the aforementioned title registered, and that the movie will go on the floors on November 4 with it’s first scehule in Mumbai, there has now been a recent development.

Cinematographer Ayananka Bose, who was worked with Salman Khan before, out up on Instagram story with a picture having lots of papers that read the word ‘Radhe’ at various places. It looked like the schedule of the movie with dates and scenes to be shot on those days. Even the caption of the post read ‘Locked n loaded!! Any guesses which film?? Hint: Eid!’ 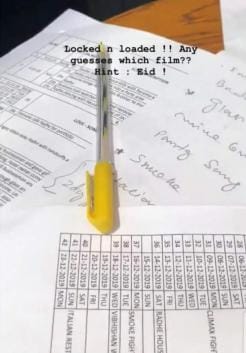 Radhe: India’s most Wanted Cop is being said to be helmed by Prabhu Deva, who has worked with Salman on Wanted and Dabangg 3. For the uninitiated, the movie will be a remake of the 2017 Korean movie Outlaws.  An official announcement is yet to be made.

The actor recently wrapped up the shoot of the third series of the Dabangg franchise, which will see him reprising his role of Chulbul Pandey.