Director Abhishek Shrama and team 'Suraj Pe Mangal Bhari' have been shooting despite coronavirus concern and finally wrapped up shooting in Mumbai.

Fatima Sana Shaikh, Diljit Dosanjh and Manoj Bajpayee starrer Suraj Pe Mangal Bhari crew has been filming in Mumbai amid the growing concern over the coronavirus crisis and has finally wrapped up principal shoot on Monday morning. The film is set to release in the second half of the year and has been shot entirely in the city.

Fatima shared a pic on social media featuring her, Suraj Pe Mangal Bhari director Abhishek Sharma and others as they close the shooting of the project around early morning on Monday. Diljit was also shooting with the crew around the time of Holi and had shared a pic with Fatima on the sets. 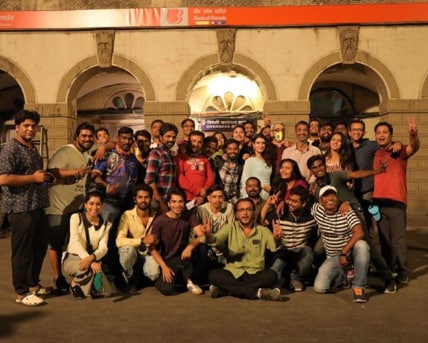 Meanwhile, the coronavirus pandemic has led to the cancellation of various events, award functions, interviews and shooting schedules. Film bodies in India including Federation of Western Indian Cine Employees (FWICE) and Indian Film & Television Directors’ Association (IFTDA) on Sunday decided to put shootings of films, TV shows and web series on hold from March 19 to March 31.

Read: Coronavirus Scare in India: Film, TV and Web Series Shooting to be Put on Hold Until March 31

Suraj Pe Mangal Bhari is a family comedy set in the '90s Mumbai. It was a start-to-finish schedule for the film from January 6 till mid-March.

Diljit and Manoj had also recently shot at a crowded Chhatrapati Shivaji Maharaj Terminus (CSMT) platform for their upcoming film.