Set in the days post the assassination of America’s most-loved President John F Kennedy, Jackie reveals as much as it conceals.

Set in the days post the assassination of America’s most-loved President John F Kennedy, Jackie reveals as much as it conceals. The film is a sophisticated depiction of his gorgeous wife Jaqueline’s life after the death of her ‘beloved’ husband. Much attention has been given to the costumes, body language and of course, the emotional turmoil that the first lady goes through after the loss.

The film opens with a scene shot in chilly Massachusetts in 1963, just a week after John F Kennedy (Caspar Phillipson) was shot dead in Texas. Soon, the tension in his wife Jacqueline’s (Natalie Portman) life becomes palpable through the series of well-defined situations. Two key characters take the narrative forward – an unnamed journalist (Billy Crudup) who happens to be the first reporter to bag her interview after the mishap and the priest (John Hurt) who Jackie decides to confide in.

The narrative keeps going back and forth to develop the multi layers in Jackie’s character and it does so beautifully. Each scene brings out one or another trait of the first lady and offers Natalie a chance to prove her credentials as an actor.

She bares it all in the interview scenes but maintains that it isn’t about her personal life as much as it’s about her husband’s legacy of ruling over his version of Camelot. She often takes the charge, edits the text and dictates what stays on and off the record during the interaction - highlighting the human urge to control everything – even the things which aren’t in your power. 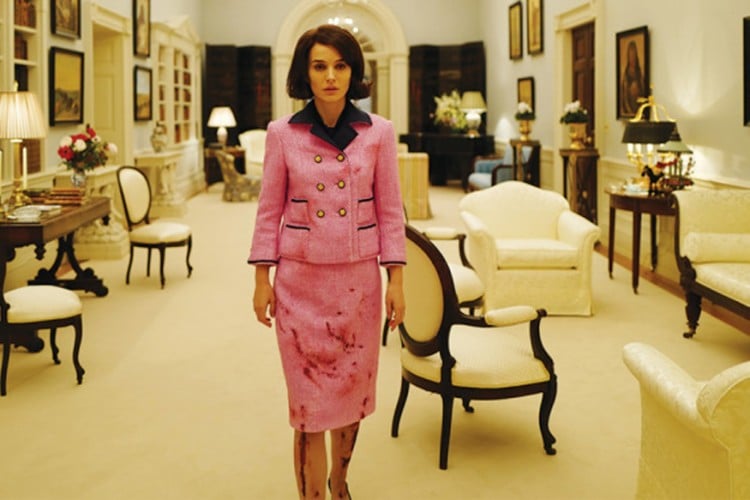 The scenes with the priest bring out her vulnerable side. She tries to keep her calm in public but breaks down in private. Her struggle in coping up with the loss of love, her angst over the uncertainty of the family’s future, the threat to her husband’s legacy and her personal Camelot is woven well in terms of the execution and the taut build-up of the plot. Ones with her brother-in-law (Peter Sarsgaard), kids and confidante Nancy throws light into her helplessness and the desire to hold everything together at the same time.

Another timeline that the film transverses is when she takes a TV channel around a White House tour. Even though the grace and poise is far too commendable, the constant teeth-biting accent makes it difficult for the viewers to focus on the good part. Jacqueline Kennedy was a major style icon in her days and the elegant wardrobe has been kept intact in the film. Even the Pink Chanel ensemble dress she wore on her husband’s assassination was brought to screen with the same charm.

Whether she was upset more about losing her husband or the fame and name that the tag ‘first lady’ brought with it - is left to the viewer’s imagination. Natalie, for the most part, does a fine job in what looks like the accurate depiction of the first lady. She sends chills down your spine with some scenes and with others, makes you feel like it’s a bit forced.

The narrative develops at a slow pace yet maintains a crisp thrill all throughout. It keeps you invested but doesn’t take you in as much as you’d expect and would like it to. Also, the nonchalant background score makes it a tad bit difficult to keep your attention from wavering.