Many popular celebs have been tweeting about ongoing farmers’ protest in the country. The latest entry on the list is Bollywood actress Janhvi Kapoor.

Many popular celebs have been tweeting about ongoing farmers’ protest in the country. The latest entry on the list is Bollywood actress Janhvi Kapoor. The actress took to her social media handle and showed her support to the farmers protesting at the borders of Delhi against the three new farm laws.

She shared a note in her Instagram story which reads, “Farmers are at the heart of our country. I recognise and values the role that they play in feeding our nation.” She also hoped for the situation to reach a conclusion soon. 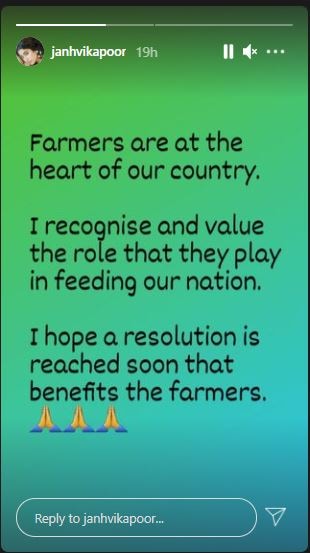 Earlier, many popular Bollywood celebs including Priyanka Chopra Jonas, Dharmendra, Diljit Dosanjh, Sonu Sood, Gul Panag, Preity Zinta, Sonam Kapoor, Richa Chadha, Swara Bhaskar and Taapsee Pannu have also shown their solidarity with the farmers and tweeted in support of them. The centre has been in talks with the farm union representatives and is trying to resolve the issue. On Friday, January 8, the farm union representatives and the centre had a talk for the eighth time, however, it was concluded on an inconclusive note. As per the reports, the next round of talks will be held on January 15.

Meanwhile, Janhvi has been in headlines for several reasons. A few days ago, her pictures of holidaying in Goa with Kartik Aryan were doing rounds on the internet. The duo has been roped for Karan Johar’s Dostana 2. Their pictures have grabbed attention and had given rise to the speculations that the two are dating.

Another reason for which she has been hitting the headlines is her newly bought apartment worth Rs 39 crores. Reportedly, her new house is located in Juhu, Mumbai and the carpet area of the flat is 3,456 square feet. As per the reports published by Bollywood Hungama, the actress has paid a stamp duty of Rs 78 lakh and have taken a loan of around 23 crores.