Shraddha Kapoor rang in holiday spirit dressed in a Santa Claus hat. She shared pictures of herself on social media, enjoying the eve of Christmas. The actress recently launched the trailer of her forthcoming film Street Dancer 3D and seems all set to spend holiday time with family and friends. Shraddha even unpacked gifts she received on the celebratory occasion.

Meanwhile, Alia rang in Christmas eve with her friend Akansha Ranjan Kapoor and posted a pic on her Instagram stories. She was dressed in green colour, printed nightsuit as she posed with Akansha in front of their Christmas tree. Akansha wore a red colour dress, similar to Alia's. The post shared by the friends has the famous sitcom FRIENDS line written at the bottom--I'll be there for you. Now we know that Alia and Akansha also like the show.

In another instance, Sara Ali Khan also posted a picture to her Insta stories, which had a Christmas tree decorated with gifts. She wished her fans with a "happy holidays" message. Janhvi Kapoor, who is waiting for the release of her Netflix film Ghost Stories on January 1, also wished fans merry Christmas with a post on Instagram. She wore a red-Santa hat too.

The pics of Janhvi, Shraddha, Sara, Good Newwz film cast and Alia in Christmas spirit will set your mood right for some holidays:

A Christmas calendar that has my favourites treats in it! And messages of daily inspiration about incredible women in history! Thank you @thebodyshopindia for spreading the Christmas cheer! 🎄❤ #TheBodyShopIndia #ImDreamingOf #DreamBig #ChristmasAtTheBodyShop 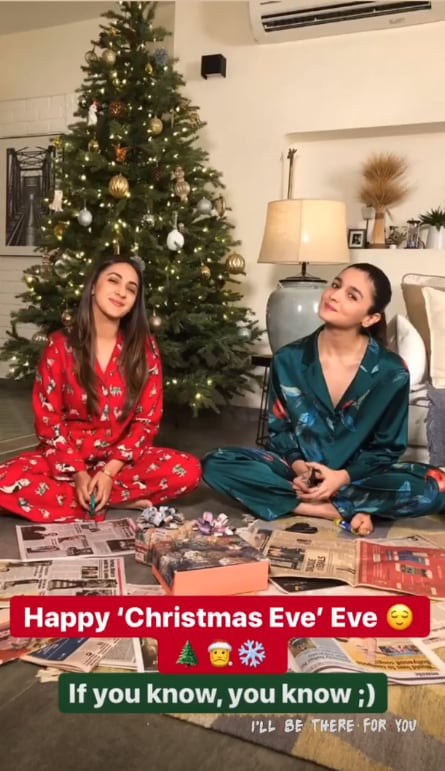 It’s almost Christmas and I’ve got more than one reason to be this happy!! ✨ p.s this was truly candid