Jennifer Aniston posted a still from the 2012 comedy Wanderlust and captioned it, 'Happy birthday, Paul Rudd! You don't age.'

Hollywood actress Jennifer Aniston dedicated a sweet Instagram post to her former co-star and friend Paul Rudd on Tuesday. On the occasion of Paul’s 52nd birthday, Jennifer Aniston took to Instagram to share some memorable pictures from their past collaborations. Jennifer’s Instagram story featured a still from their 2012 comedy movie Wanderlust. In the picture, she is seen wearing a black dress with a brown overcoat while Paul is seen wearing a white t-shirt with black pants. She captioned the photo, “Happy birthday #PaulRudd!! You don’t age, which is weird – but we celebrate you anyway.” She also added a bunch of heart emojis. Next, Jennifer posted a pillow-fight photo from their joint GQ cover story that published in 2012 to promote the film. On that one, she wrote, “I love you!” She followed it up with a GIF of them awkwardly hugging in Wanderlust. 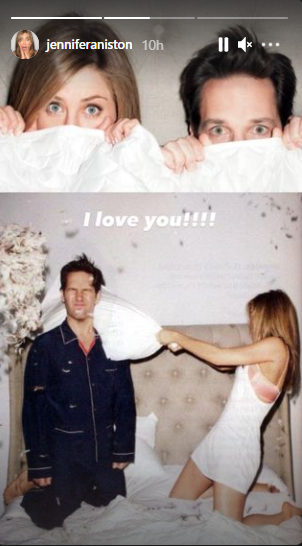 Paul Rudd and Jennifer Aniston’s 2012 movie is a story of a couple who has stressful lives in the city of New York and as the economy crashes the two try to find some solace by escaping to Atlanta. The movie was directed by David Wain. Before that, the two actors have worked together on screen a number of times. In 1998, Paul and Jennifer starred in the romantic comedy The Object of My Affection. That was when Paul had just started out starring as a leading actor following the success of the 1995 movie Clueless. While 52-year-old Jennifer was enjoying the fame of her classic American sitcom Friends, in which she starred as Rachel Green.

Jennifer will soon be seen in the second season of the critically acclaimed Apple series ‘The Morning Show’.