A Hollywood actioner and a Bollywood laugh riot - movie-goers have the option to choose from two interesting releases in theatres this week. Keanu Reeves is back with third installment of the John Wick series, which is titled Parabellum. In the acclaimed action franchise, Reeves plays a retired assassin, who returns to battlegrounds to avenge the killing of his dog. Parabellum picks up right after the events of John Wick Chapter 2, where Reeves is in desperate lookout for partners to help him survive the international killing contract of USD 14 million.

Our very own action star Ajay Devgn is showing off his funny side once again in De De Pyaar De, which also released today. The film, also starring Rakul Preet and Tabu, has Ajay play a 50-year-old divorcee who falls in love with a 26-year-old woman. When he tries to introduce her to his family and kids, that's when all hell breaks loose. Directed by Akiv Ali and produced by T-Series and Luv Films, the film is a fun-filled ride into middle-age crisis, at the cost of Ajay's character.
1:17 pm (IST)

John Wick and De De Pyaar De have both opened to a decent response. The two films will rely on the presence of  lead stars like Keanu Reeves and Ajay Devgn to maximise their box office profits. As of now, an 18-25% booking ratio has been registered for the films, with De De Pyaar De slightly ahead in the race, owing to its family appeal and more number of theater screens pan-India. However, don't just count John Wick out. He is known to 'kill 'em all.'

Actors Suniel Shetty, Abhishek Bachchan and Taapsee Pannu wished the team of De De Pyaar De all the best for their release. An excited Suniel called Ajay a hit machine and wrote, “Hit machine AJJJJ!!! Wishing u and the entire team the very best for #DeDePyaarDe @ajaydevgn, Tabu, @Rakulpreet @AkivAli.” Abhishek called Ajay his big brother and tweeted, “All the very best to my big brother @ajaydevgn and the entire team of #DeDePyaarDe for their release today. Go watch guys.” Taapsee had a special message for Rakul Preet, “Good luck hotness!  @Rakulpreet go set the temperature at the box office soaring with #DeDePyaarDe tomorrow”

According to Hollywood publication Variety, John Wick: Chapter 3  is heading for an opening weekend between $30 million and $35 million from 3,700 North American theaters. Some box office watchers predict that positive word of mouth could propel those numbers to more than $40 million. It is being said that the Keanu Reeves-led thriller could have a solid chance at giving a tough competition to Avengers: Endgame, ending its three-week reign.

Ayushmann Khurrana, Hansal Mehta and others from the film industry have praised De De Pyaar De. Ayushmann tweeted, “#DeDePyaarDe is such a fun watch. Congrats @ajaydevgn sir, Tabu maam @Rakulpreet and the entire team.” Filmmaker Hansal Mehta posted, “#DeDePyaarDe is more than a fun ride. Smart writing, some very mature moments, generous doses of comedy, very good performances by @ajaydevgn and @Rakulpreet and a stand out act by Tabu. This is a mainstream entertainer that ticks all the right boxes and creates a few new boxes.”

For the uninitiated, Keanu Reeves summed up the 'John Wick' franchise in a special 60-second video. In the new video, hosted by entertainment channel IGN, Reeves can be seen recalling the events of the first two films that came out in 2014 and 2017 respectively, giving us a glimpse of his enviable, sharp brain. You can watch the video to prepare yourself before going to watch John Wick 3. For the uninitiated, Keanu Reeves summed up the 'John Wick' franchise in a special 60-second video. Take a look.

De De Pyaar De has opened to decent reviews. The film is full of moments that will crack you up. The first half, especially, is entertaining and refreshing. It establishes stereotypes and then breaks them as well. Film trade analyst Taran Adarsh, in his one word review, called it a winner, adding, "Entertains big time... Smart writing, plenty of laugh aloud moments, strong emotions, top notch acts (Ajay, Tabu, Rakul Preet)... Director Akiv Ali gives a refreshing twist to relationships."

John Wick: Chapter 3: Parabellum follows the template of a classic revenge-thriller through Keanu Reeves' grieving Jonathan.  Parabellum, an uber stylish action flick, succeeds not on the merit of its story, but on how coolly it effectuates mass slaughter in cinema. Director Chad Stahelski's Parabellum boasts of elegant elimination sequences aplenty, with each brutal move ingeniously designed and judiciously choreographed to maximum effect. But sadly, in Chapter 3, Reeves is made into a vehicle of mindless assault, somebody who would do just about anyone's bidding for his survival in a secret network of only 'first-named' assassins. 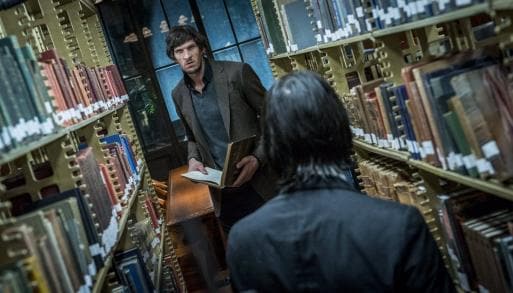