The now almost (arguably) reverential John Wick franchise was brought to being in 2014 when an aptly relatable human of otherwise mythological strength, stamina and resolve, Jonathan's, played by a stoic Keanu Reeves, dog is stomped on and his beloved car stolen, immediately after his wife, Helen, dies in a hospital. 5 murderous years down the line, and scores of human body count later, the titular, grieving anti-hero returns with Parabellum, an uber stylish action flick that succeeds not on the merit of its story, but on how coolly it effectuates mass slaughter in cinema.

Director Chad Stahelski's Parabellum boasts of elegant elimination sequences aplenty, with each brutal move ingeniously designed and judiciously choreographed to maximum effect. But, while the quality of violence perpetrated by Wick on an endless stream of killers was akin to an artsy performance in the previous two films, sadly, here he is reduced to a vehicle of mindless assault, somebody who would do just about anyone's bidding for his survival in a secret network of only 'first-named' assassins (Chapter 3 also dwells on the etymology of the word assassin).

Ironically, no one but Wick himself sincerely believed that he was done with violence. Parabellum picks up right after the events of Chapter 2 where John is on the run after killing Italian mafia boss Santino D’Antonio (Riccardo Scamarcio) on Continental grounds-- seemingly the only place in New York where murder is strictly prohibited, or at least disapproved of. Near about every clock ticking in the city, from Times Square to public libraries, invests us in the story of a cornered hero, harking back to the ever alluring revenge-thriller genre, as Wick somehow seeks to survive an international contract of USD 14-15 million, which basically implies that he fights off every unassuming soul in the city and outside, who all are strangely henchmen in disguise. Reeves' John is more of an emotion and less of a character. The way monosyllabic Reeves stares, nods, looks on, twitches among other things set the tone for the beautiful, yet uneasy, idea of search for anonymity in an increasingly connected world. That John had focused every bit of his pent up anger and aggression towards claiming his autonomy in a system of conflicted morals was his lure for a layman, but in Parabellum, we see him helplessly getting drawn into the system, with a painful end in sight. Perhaps Parabellum is the first of the franchise where seeing Wick getting hurt is as much a thrill as watching him kill. And such desensitisation is not great.

Actors like Halle Berry, Asia Kate Dillon, Anjelica Houston and Mark Dacascos make an endearing addition to the cast of John Wick or rather a pile up of bodies. Dacascos emerges as an on point, wry-humoured ninja and his role in Parabellum is meant to lighten up the tense mood. Although not Wick's. He is as tense as they come. 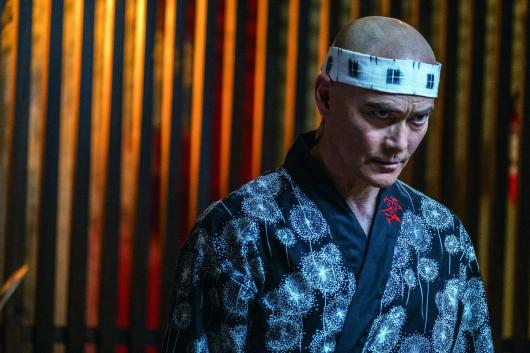 In all, Parabellum's action level is at an all time ecstatic high, while the series' dog jokes wear you down and John Wick's myth almost begins to get too heavy, or boring, for yet another film, which, for the reader's sake is set up for in the end-- a dedicated Matrix reunion. It's the familiar that mesmerizes us, but John Wick's dedication to convey a complex emotion, through action, is just starting to feel like it needs a screenwriting bolster or a creative changeover, like the climactic action sequence in Parabellum where bright fluorescent tubes add to the edge. A great sequence indeed.