Kangana Ranaut will next feature in Thalaivi, the biopic of J Jayalalithaa

Currently, Kangana Ranaut is shooting for her forthcoming action-thriller Dhaakad in Budapest.

A fan of actress Kangana Ranaut died in the Himachal landslide on Sunday. The massive landslide in the mountainous Kinnaur district claimed the lives of nine tourists. Among them was a young doctor from Jaipur who even shared a picturesque travel shot online, minutes before the tragedy. Dr Deepa Sharma’s death left Kangana devastated. Via her social media handle, she condoled the demise of the 34-year-old doctor and called it ‘beyond tragic’. On her Instagram stories, the actress penned a note that read, “She was a great fan, she sent me lovely letters and showered me with gifts and sweets and also visited my house in Manali/ Seems like a big jolt.” Kangana also mentioned about an incident when she first met the fan in Jaipur during the filming of Manikarnika. The fan was excited to see her and even hugged her tight. The duo has since stayed in touch. But the recent news has been devastating for Kangana, especially because the incident took place in Himachal. 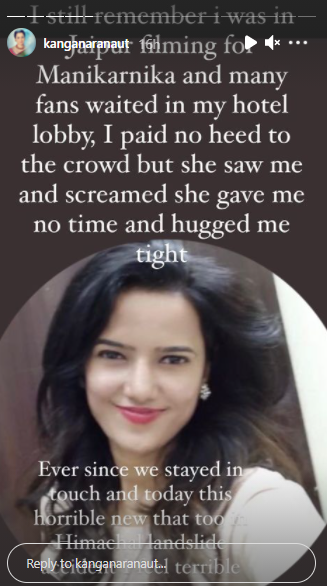 In the subsequent stories, Kangana offered condolences to the family and friends of Deepa. Addressing the late doctor, she wrote, “You will always be in my heart. Come back again please.”

Finally, she urged people travelling to the mountains during the rainy season to refrain from visiting as it is a terrible idea. “Landslides are natural in this weather but because of many tunnels, highways and roads construction, we are messing with mountains and valleys natural balance and geometry." She also wrote thatthe constructions and bombings for drilling and digging the mountains have turned these landslides into violent and too destructive.She shared footage of the terrible accident and wrote, “Mountains aren’t just beautiful and spiritual, they can be brutal and fatal as well.”

Currently, Kangana is shooting for her forthcoming action-thriller Dhaakad in Budapest. The actress, who plays a spy in the film, recently shared a video of her rehearsing action scenes with her trainer.