Home » News » Movies » Kangana Ranaut Says 'Those Who Want to Be Villains in Your Life, Make Them Comedians' in Cryptic Post
1-MIN READ

Kangana Ranaut Says 'Those Who Want to Be Villains in Your Life, Make Them Comedians' in Cryptic Post

Kangana Ranaut, in her latest Instagram post, wrote about growth and criticism and said that one should make the villains in their lives into comedians.

Kangana Ranaut is known for voicing her opinion on social media quite often. On Friday, the actress took to her social media handle to share a cryptic post about her bullies and standing up to them. She wrote, “I never liked the idea of using emotions such as humiliations, failures or any other kind of unfair treatment like bullying done to us, using those experiences as a fuel to ignite our ambition or self worth, that’s never a good idea never see yourself from the eyes of those who fail to appreciate you but use their criticism to grow… and when you grow don’t forget to rub it in their faces and have fun. After all what is life without a good laugh. Those who want to be villains in your life make them comedians and it will be a good story… direct it yourself.” 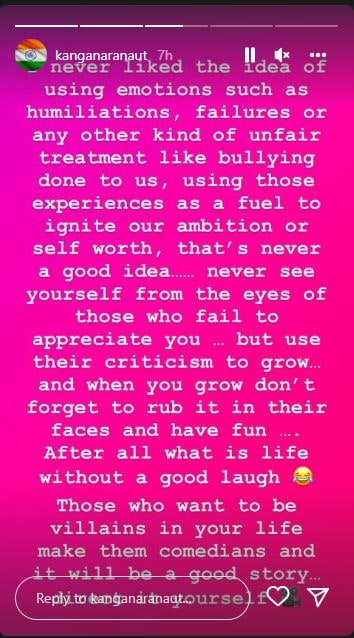 A couple of days back, Kangana took a dig at Aamir Khan after ‘Boycott Laal Singh Chaddha’ started trending on Twitter. “I think all the negativity around the upcoming release Laal Singh Chadda is skillfully curated by mastermind Aamir Khan Ji himself. This year, no Hindi films have worked (barring one exception of a comedy sequel) only south films deeply rooted in Indian culture or with local flavour have worked. A Hollywood remake would have not worked anyway,” she wrote.

The actress is also known for taking constant digs at filmmaker Karan Johar for apparently launching star kids through his films and promoting nepotism.

Meanwhile, on the work front, Kangana Ranaut’s latest film Dhaakad fell flat at the box office. She is now gearing up for her next movie, Emergency. Her look as Indira Gandhi is also out and has been loved by the people. This will be her second directorial after Manikarnika.