As the gyms remain shut and people are forced to stay indoors due to the outbreak of coronavirus, different ways are being attempted to working out at home. Here's how Kareena Kapoor has been keeping herself fit.

It might have taken Bebo fans a great deal of patience for their beloved celebrity to feature on social media, but Kareena Kapoor Khan hasn’t disappointed them ever since she debuted on Instagram.

As the gyms remain shut and people are forced to stay indoors due to the outbreak of coronavirus, different ways are being attempted to working out at home.

Kareena shared a glimpse of her self-quarantine fitness regime on her Instagram story.

In a mirror selfie image posted by the Tashan actor, we see her dressed in black sports bra and tights flaunting her notched abs.

In her caption, the 39-year-old actress wrote, “Does refusing to run on the treadmill count as resistance training?” 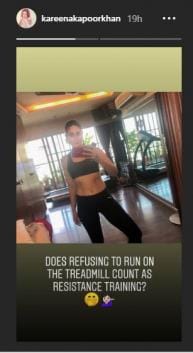 On Wednesday, Kareena quipped over a childhood picture of herself where she is seen sitting on the floor and holding up her hands.

“Me... when someone tries to shake my hand these days! #StayHome #StaySafe #SocialDistancing,” she captioned it.

Me... when someone tries to shake my hand these days! #StayHome #StaySafe #SocialDistancing

Amidst social distancing, Kareena had shared a picture of husband Saif Ali Khan, an avid reader, sitting cosy with a paperback. The second of the two images she posted, shows her hooked to her phone, presumably scrolling Instagram. "Looks like he is 'booked' for the week... While I Instagram," she captioned the pictures.

Kareena will be ne

xt seen in Aamir Khan-starrer Laal Singh Chaddha directed by Advait Chandan. The film is the Indian adaptation of Tom Hanks-starrer Forrest Gump. The upcoming film is slated for a Christmas release.